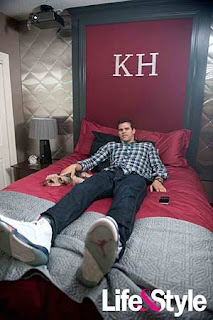 Kris Humphries Reveals His Remodeled Bachelor Pad, Kris Humphries, who famously split from Kim Kardashian after only 72 days of marriage, has made some improvements to his Minnesota digs -- and, fortunately, his ex's signature animal print is nowhere in sight! The New Jersey Nets player, 26, worked with Jason Cameron and former NFL athlete Tony Siragusa, of DIY Network's "Man Caves," to transform his basement into the ultimate bachelor pad. Highlights include a headboard over his bed featuring his initials and a state-of-the-art entertainment center.
The former Mr. Kardashian wanted what Cameron describes as "a cool, modern space where he could hang out with his buddies and play video games or watch TV."
Life & Style 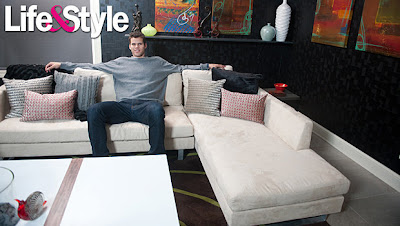 "Remodeling my place felt great," Kris tells Life & Style, which features exclusive pics of the basement in its latest issue. "It was the perfect way to kick off the season and have a fresh start."
Humphries, who often travels for his job, says the space will be the place to find him in his downtime
via: yahoo
Posted by News Hump at 05:05