Brenda Song: Pregnant or Not?

Brenda Song: Pregnant or Not? 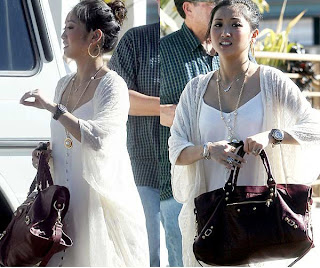 Brenda Song: Pregnant or Not?, Though Disney star Brenda Song still hasn't confirmed her pregnancy, these pictures have to make you wonder. Reports surfaced in August that the 23-year-old was expecting a baby with musician boyfriend Trace Cyrus (yes, Miley's brother), but neither Trace nor Brenda would address the subject back then. Brenda's mom, meanwhile, denied the news. "She's actually not pregnant ... It's very upsetting to our family because of what I'm going through and it's not how we raised her," Mai Song told Star magazine in September.
But "The Social Network" actress has been spotted in loose-fitting clothing lately, including this flowy white dress she donned Thursday in L.A.
Baby or not, Brenda and Trace are looking to become a family. The two announced their engagement in October. "I am very excited to say, last week I asked my girlfriend Brenda Song to marry me and she said YES! We are both very excited to be engaged!" 22-year-old Trace tweeted then.
And a certain one of his siblings sounded equally thrilled: "@TraceCyrus can't wait for Brenda to be a Cyrus :) couldn't be more excited about my 'sister in law to be' yay :)," Miley posted to Twitter in response.
But will Miley have a sister-in-law and a new nephew or niece soon? Stay tuned …
via: yahoo
Posted by News Hump at 07:30