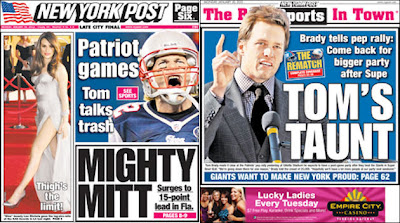 N.Y. media flips out over Brady comment, Tom Brady is hopeful of winning the Super Bowl and the New York media is taking it personally, Tom Brady gets attacked in some New York tabloids after delivering a message to Patriots fans. The New England Patriots and 25,000 fans gathered for a pep rally at Gillette Stadium before the Patriots departed for Indianapolis. Quarterback Tom Brady was one of the Patriots who took the microphone at the 13-minute rally, and he said this:
"We have the greatest fans in America. You guys have proved that year in and year out with your support. I wish I could take all you guys to Indy with us. We're going down there, and we're going down there for one reason. We're going to give it our best and hopefully we have a lot more people at our party next weekend."
"Hopefully." As in "Hopefully, we'll win," which doesn't seem like an unreasonable thing to say under any circumstances. Initially, the Brady quote didn't even make the Associated Press' story about the rally. They had quotes from Kevin Faulk, Wes Welker and Jerod Mayo, but nothing of Brady's comment.
That's understandable, as Handsome Tom didn't really say anything noteworthy. That is, unless, you're a New York newspaper and you're desperate to create some kind of "Tom Brady disrespects the Giants!" narrative. In that case, Tom's innocuous quote becomes something like this (via the New York Post):
Apparently, as far as the New York media is concerned, "Hopefully we'll have a lot more people at our party next weekend" translates as, "The New York Giants suck at football and at life, and we will have no mercy on them, despite their obvious physical, mental and emotional handicaps. The New England Patriots are superior human beings in every way, and that's why we're going to beat the Giants by 70. May everyone in New York severely burn the roof of their mouth."

Other media members jumped on the quote and tried to extract something more out of it. Brady was later asked if the quote was "intended to exude confidence." According to the Boston Herald, someone asked Wes Welker if the team was already planning a victory party. Logan Mankins was asked about it, too.