Cynthia Nixon 'chose to be gay'

Cynthia Nixon 'chose to be gay' 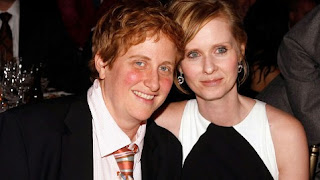 Cynthia Nixon 'chose to be gay', Cynthia Nixon: Gay by Choice?, "Sex and the City" star Cynthia Nixon, who came out in 2004, is drawing controversy for a speech in which she said being gay, for her, is a choice. Cynthia Nixon stands by her statement that she is gay by choice, despite the backlash she’s received from members of the gay community.
The “Sex and the City” star recently clarified remarks she made during a speech to a gay audience in which she declared, “I’ve been straight and I’ve been gay, and gay is better.”
The remark caused a stir in the lesbian, gay, bisexual and transgender community. Nixon told last Sunday’s New York Times magazine that she was pressured to change what she said, “because they said it implies that homosexuality can be a choice.
“For me, it is a choice,” Nixon told the Times. “I understand that for many people it’s not, but for me it’s a choice, and you don’t get to define my gayness for me.”
Nixon, 45, is engaged to her long-time partner Christine Marinoni, who gave birth last February to their son, Max Ellington Nixon-Marinoni.
“I also feel like people think I was walking around in a cloud and didn’t realize I was gay, which I find really offensive,” she told the Times. “I find it offensive to me, but I also find it offensive to all the men I’ve been out with.”
Before her relationship with Marinoni, Nixon was in a 15-year relationship with college sweetheart Danny Mozes. Nixon and Mozes, who split in 2003, have two children together, 15-year-old Samantha and 9-year-old Charlie.
A year later, Nixon went public with her romance with Marinoni.
“I say it doesn’t matter if we flew here or we swam here. It matters that we are here and we are one group and let us stop trying to make a litmus test for who is considered gay and who is not,” she told the Times about her decision to be with Marinoni.
But gay blogger and activist John Aravosis said Nixon does a disservice to the gay movement by using the word “choice.” She should have said she is bisexual, not choosing to be gay, he wrote on the AmericaBlog Gay website.
“If you like both flavors, men and women, you’re bisexual, you’re not gay, so please don’t tell people that you are gay, and that gay people can “choose” their sexual orientation, i.e., will it out of nowhere. Because they can’t,” he wrote. “Every religious right hatemonger is now going to quote this woman every single time they want to deny us our civil rights.”
Nixon recently appeared with a shaved head on “Live with Kelly.” Her new look is for her upcoming role in the Broadway play “Wit” in which she plays a professor stricken with ovarian cancer. Nixon, herself, dealt with a bout of breast cancer in 2006.
via: abc
Posted by News Hump at 07:57