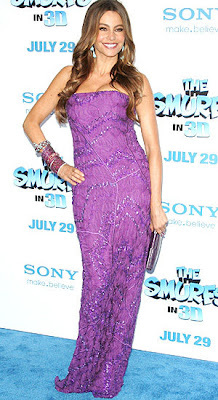 Sofia Vergara Named AskMen’s Most Desirable Woman of 2012, 2012's 'most desirable' woman revealed,
A curvy, 39-year-old star beats out Kim, Scarlett, and Rihanna for the new title. It's often said that Hollywood is a young woman's game, but AskMen.com readers officially bucked that trend in 2012, as Sofia Vergara was named #1 on the men's online magazine's annual list of the Top 99 Most Desirable Women, which was announced on Tuesday. But while the 39-year-old "Modern Family" star snagged the top spot on the site's Top 99, former A-list mainstays like Jennifer Aniston and Angelina Jolie gave way to recent additions and fresh favorites, a clear signal that, as far as AskMen.com readers are concerned, there's a new guard in town.
But when it comes to "desirability," Sofia Vergara proves that age is just a number -- in this case, #1. After enjoying a breakout year thanks to ABC's "Modern Family," Vergara placed third on the website's list in 2011. And AskMen.com readers obviously haven't cooled on the fiery Colombian bombshell in the past 12 months, bumping her up to first in 2012. In doing so, the actress beat out a number of younger leading ladies and newcomers to lead the Top 10, such as Victoria's Secret favorites Miranda Kerr (#4) and Candice Swanepoel (#10), rapper Nicki Minaj (#5), and actresses Emma Stone (#6) and Scarlett Johansson (#7).
Meanwhile, perennial favorites like Jennifer Aniston and Angelina Jolie were left off the list entirely in 2012. The tabloid mainstays were also fixtures on the site's Top 99 for years -- especially Jolie, who made the list 10 years in a row from 2001 to 2011 -- but it seems guys are growing tired of the former paragons of desirability. And as the old guard falls, new favorites like Vergara, Kim Kardashian (#8), Rihanna (#9), and Zooey Deschanel (#12) have risen up to take their place.
A Little More About AskMen's Top 99 Most Desirable Women of 2012
Now in its 11th year, AskMen's Top 99 Most Desirable Women is annually the site's largest feature, and helps signal shifts in the qualities men are looking for in their dream girls and celebrity crushes; over 1 million readers voted on the Top 99 in 2012. And Vergara's meteoric ascent to #1, combined with the notable omissions of Aniston and Jolie, indicates that guys are increasingly looking for fresh faces.

Nowhere is that trend more apparent than in 2012's Top 5, where it only took a year for Kate Upton to catch the attention of nearly every man in America; after not being ranked in 2011, the "Sports Illustrated" Rookie of the Year skyrocketed to #2. And right behind her is Rooney Mara at #3: thanks to "The Girl with the Dragon Tattoo" and her resulting Oscar nomination, the actress has gone from virtually-unknown to impossible to miss.

Time will tell if Sofia Vergara can keep charming AskMen.com readers into 2013, but as new names continue to move up in the site's Top 99, displacing old standbys, the curvy 39-year-old actress is leading the charge, and proving that she has the staying power to become a new favorite for men everywhere.

AskMen.com's Top 99 Most Desirable Women is an annual list based on votes from both AskMen.com readers and staff, ranking the famous females deemed to be the year's most alluring.
via: yahoo
Posted by News Hump at 10:14