Fold-up car of the future unveiled for Europe

Fold-up car of the future unveiled for Europe 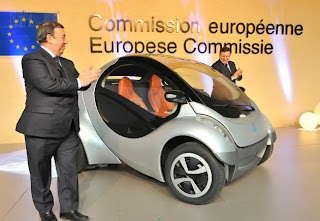 Fold-up car of the future unveiled for Europe, Revolutionary car folds up like a stroller, This electric two-seater has no doors and the motor is located in — of all places — the wheels. A tiny revolutionary fold-up car designed in Spain's Basque country as the answer to urban stress and pollution was unveiled Tuesday before hitting European cities in 2013.
The "Hiriko," the Basque word for "urban," is an electric two-seater with no doors whose motor is located in the wheels and which folds up like a child's collapsible buggy, or stroller, for easy parking.
Dreamt up by Boston's MIT-Media lab, the concept was developed by a consortium of seven small Basque firms under the name Hiriko Driving Mobility, with a prototype unveiled by European Commission president Jose Manuel Barroso.
Demonstrating for journalists, Barroso clambered in through the fold-up front windscreen of the 1.5-metre-long car.
"European ideas usually are developed in the United States. This time an American idea is being made in Europe," consortium spokesman Gorka Espiau told AFP.
Its makers are in talks with a number of European cities to assemble the tiny cars that can run 120 kilometers (75 miles) without a recharge and whose speed is electronically set to respect city limits.
They envision it as a city-owned vehicle, up for hire like the fleets of bicycles available in many European cities, or put up for sale privately at around 12,500 euros.
Several cities have shows interest, including Berlin, Barcelona, San Francisco and Hong Kong. Talks are under way with Paris, London, Boston, Dubai and Brussels.
The vehicle's four wheels turn at right angles to facilitate sideways parking in tight spaces.
The backers describe the "Hiriko" project as a "European social innovation initiative offering a systematic solution to major societal challenges: urban transportation, pollution and job creation."
via: yahoo
Posted by News Hump at 10:07