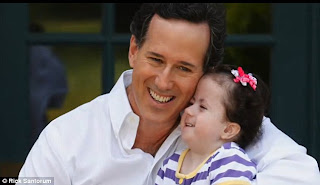 Rick Santorum’s Daughter Isabella Sick With Pneumonia, Isabella Santorum & Trisomy 18, Controversial GOP Presidential candidate Rick Santorum’s daughter Isabella was hospitalized with pneumonia three days ago but has made what he calls a “miraculous recovery.”
Isabella, known as “Bella” to Santorum and his wife, has Trisomy 18, a genetic disorder. Illnesses like pneumonia can be dangerous, even fatal, to someone in her condition.
For his part, Santorum stayed with his daughter all three days, missing campaign stops in Florida, a key primary state.
GOP front runner Newt Gingrich offered his condolences and prayers, as did Sarah Palin and Herman Cain.
Isabella is expected to make a full recovery. Santorum will be back on the campaign trail today.
via: dt
Posted by News Hump at 04:53