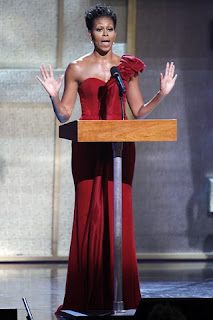 White House Denies Michelle Obama Lingerie Spree, White House denies first lady spent $50,000 on lingerie, First Lady Denial, The White House has denied claims that Michelle Obama spent $50,000 (£32,500) in Agent Provocateur, allegedly boosting its sales by 12 per cent. Reports have suggested that America's First Lady closed off a section of Madison Avenue to privately shop in one of the lingerie label's New York stores, but Kristina Schake - director of communications for Michelle Obama - has denounced the story as "100 per cent false".
"Recent claims regarding Michelle Obama and purchases made at an Agent Provocateur boutique are incorrect," a spokesperson for Agent Provocateur told the Daily Mail. "Agent Provocateur never discusses any of its clientele or their purchases."
Along with the First Lady, recent allegations have also claimed that The Queen of Qatar, Sheikha Mozah has raised sale profits for the brand, though this is yet to be confirmed.
via: vogue
Posted by News Hump at 05:49

Email ThisBlogThis!Share to TwitterShare to FacebookShare to Pinterest
Labels: Celebrities, Interesting, News, US