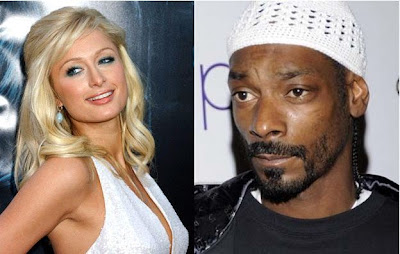 Paris Hilton says she's recording with Snoop Dogg, Paris & Snoop pairing up, Paris Hilton has landed another big name collaboration for her upcoming music comeback -- Snoop Dogg is recording a track with her.
The socialite released her debut album, "Paris," in 2006 and it reached No. 6 on the U.S. Billboard 200 chart. Hilton is aiming to relaunch her pop career with a second record and she has been working with stars including LMFAO and producer/DJ Afrojack.
She has now revealed she has also persuaded rapper Snoop Dogg to lend his talents to the project.
Hilton tells New York Post gossip column Page Six, "I'm doing my new album, and Afrojack is actually executive-producing the entire thing. There are a lot of very cool collaborations on my album. It should be out in the next few months. We just finished doing my single with LMFAO, then I'm recording with Snoop Dogg."
via: msn
Posted by News Hump at 04:19