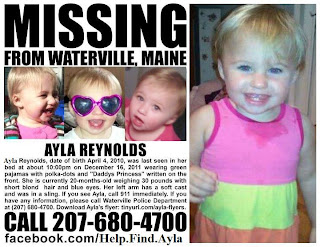 Baby Ayla Case Development, Baby Ayla Case: Investigators Say Father Is Lying to Them, Grim development in Baby Ayla case, Police investigators are analyzing blood samples found at the home of missing baby Ayla Reynolds, who disappeared six weeks ago, officials have reported.
In new developments Main State police investigators have also reportedly said they believe baby Ayla's father is lying to them.
Father, Justin DiPietro, has previously told police that he was home when baby Ayla went missing but that he has no idea what happened to her or where she is now.
The blood, found in the basement of the family home, has become a central part of the investigations, police spokesman Steve McCausland has said.
Baby Ayla, who was 20 months old when she disappeared, has been missing since her father notified the police on the morning of Dec. 17. Her father told police that she was wearing green pajamas with polka dots and the words "Daddy's Princess," when she was put to bed the night of Dec. 16. She also had a soft cast on her broken left arm.
DiPietro has said Ayla simply was not there when he went to see her the next morning.
McCausland has said, "We have questioned the three adults that were there in the home that night. We believe they have not given us the full story," according to AP.
via: CP
Posted by News Hump at 05:00