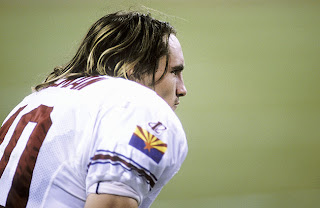 Pat Tillman's cleats for sale on eBay, Man tries to sell Pat Tillman’s game-worn cleats on eBay … for $3.2 million, An Arizona man draws criticism for putting the war hero's game-worn NFL gear on sale. The internet is a haven for weirdness at the best of times, but once in a while, you come across something that makes you wonder just what people are thinking when they get up in the morning.
So it was when we discovered that a guy with the handle "az-jt" (actually 51-year-old Jerry Martin) put up an eBay listing for a pair of cleats supposedly worn by the late Pat Tillman, the former Arizona Cardinals defensive back who died in a friendly-fire incident in Afghanistan in 2004. 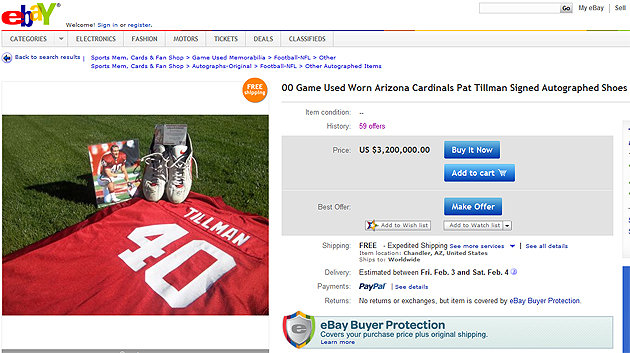 The seller claims that he can verify the origin of the cleats, and that they're currently locked in a safe deposit box in Arizona. And even if they are authentic … well, really? 3.2 million bones for the game shoes worn by a guy who died fighting for his country? You'll also note that there's no proviso for any of the money to go to the Pat Tillman Foundation, of the Wounded Warrior Project, or anything else that would help those who have been in Tillman's shoes in a more figurative and serious sense.
Nope — this is strictly a for-profit enterprise.
"Out of respect for the Tillman family, I didn't even put the shoes up for auction for years," Martin told Fox Sports. "But now I'm hoping that someone will enjoy these and cherish them as much as I do."
Those who have seen the listing seem to miss what Martin says is his intent.
"You should be ashamed of yourself," a one eBay viewer wrote to Martin. "The fact that you are trying to profit from his story and that you think people would actually pay that makes you an idiot, and a complete [expletive]."
We agree, especially with the "[expletive]" part. So far, the highest offer is $7,000, but Martin insists that he'll only accept a seven-figure bid.
A quick tip to anyone thinking of paying that much for a pair of football shoes — if you've got that kind of money burning a hole in your pocket, use it to help a VA hospital, a Veterans' service organization, the Tillman Foundation, or something else that will help ease the minds and heal the bodies of those who have given so very much.
Put it where it will do some good, and leave Martin to his particular delusions.
via: yahoo
Posted by News Hump at 04:35