Angelina, Stacy, Brad and George Pose for Awkward Pics
Angelina, Stacy, Brad and George Pose for Awkward Pics, Angelina Jolie, Stacy Keibler Pose for Awkward Photo With Brad Pitt, George Clooney, Perhaps there's a friendly thaw between Angelina Jolie and Stacy Keibler? At Sunday's Screen Actors Guild Awards in Los Angeles, both women escorted their nominated men -- Jolie's longtime love Brad Pitt, Keibler's guy of six months George Clooney -- on the red carpet and inside the Shrine Auditorium.
In a rare photo, all four of the decked-out stars caught up on the red carpet, with Jolie, 36 and Clooney, 50, and Keibler, 32, fixated intently on Pitt, 48; they also posed for a (somewhat awkward!) group shot together.
(Actress and In the Land of Blood and Honey director Jolie sizzled in a black Jenny Peckham dress that showed off her multiple back tattoos; former WWE star Keibler shined in a custom black French hand corded lace fishtail Marchesa gown.)
No word yet on whether Jolie and Keibler had a private one-on-one gabfest. But earlier this month, the brunette and blonde stunners didn't exactly get along like gangbusters on a private jet flight with their men. 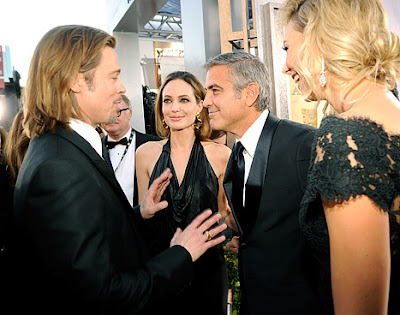 "Angelina refused to acknowledge that Stacy was even on the plane," a source told Us Weekly of a Jan. 7 flight from L.A. to the Palm Springs International Film Festival.
"Angelina went out of her way to ignore her, from takeoff to landing. She would not even look Stacy's way. She was not having it!" the insider added, explaining that Jolie is "really not a girlie girl."
Both Pitt and his pal Clooney walked home empty handed at Sunday's awards, bested in the Outstanding Male Actor in a Leading Role category by Frenchman Jean Dujardin from The Artist.
via: yahoo
Posted by News Hump at 11:05