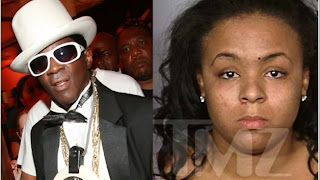 Flavor Flav's Daughter Arrested in Domestic Dispute, Flavor Flav's daughter arrested, Las Vegas police charge the 19-year-old with misdemeanor battery. All was not well in Flavor Flav's Las Vegas home this weekend, where a domestic dispute led to the arrest of his 19-year-old daughter.
Flav's daughter Dazayna reportedly got into an altercation with one of the Public Enemy rapper's stepsons. Things got so heated that someone in the house wound up calling the cops, TMZ reports.
After police arrived, they found evidence of domestic violence and took Dazayna into custody on misdemeanor battery charges.
The hip hop scion has since been released from jail.
via: bet
Posted by News Hump at 05:13