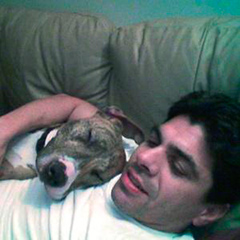 Soap Opera Actor Nick Santino Commits Suicide at 47, Nick Santino, 47, dead, Soap actor kills self over dog, Brooklyn-born actor Nick Santino committed suicide Wednesday, The New York Post reports.The soap opera star was wracked with grief after his beloved pit bull Rocco was euthanized Tuesday -- the same day Santino turned 47.
"Today I betrayed my best friend and put down my best friend," Santino wrote in a suicide note, according to close friend Stuart Sarnoff. "Rocco trusted me and I failed him. He didn't deserve this."
The actor, who appeared on seven episodes of All My Children and six episodes of Guiding Light, had been feeling "harassed" by his building management company, according to his neighbor Lia Pettigrew.
He was allegedly threatened with a $250 fine for having a barking dog, but according to neighbor Kevan Cleary, "the dog was not a barker, but somebody complained that the dog would bark."
Santino phoned a former girlfriend at 2 a.m. Wednesday. Police found Santino's body in his bedroom later that afternoon. The actor had overdosed on pills.
The actor's pet Rocco has been cremated; friends tell The New York Post Santino's remains will also be cremated.
via: um
Posted by News Hump at 04:03