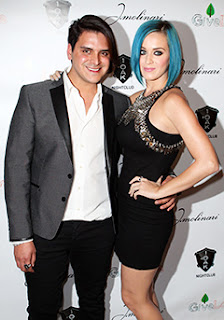 Katy Perry's Vegas outing, Mia moretti give love vegas, Katy Perry attends Las Vegas charity event with Markus Molinari. Katy Perry made her first social outing since her break-up with Russell Brand when she accompanied best friend Markus Molinari to a charity event in Las Vegas on Friday.
The lavish bash at the 1 OAK club in the Mirage Hotel was designed to raise money for Givelove.org, an organisation that provides support for victims of the Haiti earthquake.
She looked happy enough as she posed for photos on the red carpet with her jewellery designer pal.

Katy wore a short black cocktail dress, which was embellished with metal studs, and towering high-heeled sandals for the occasion, and livened up her look with blue hair.

The I Kissed A Girl singer was apparently not her normal party-loving self away from the cameras.

Comedian Russell filed for divorce in late December and blamed the end of their 14-month marriage on 'irreconcilable differences'.

It was rumoured Katy harboured hopes of a reconciliation, but they appeared to come to an end after the pair met to discuss the arrangements for their split a fortnight ago.
via: metro
Posted by News Hump at 04:24