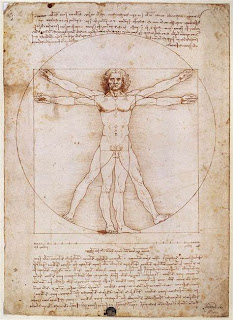 Did Leonardo da Vinci copy his famous 'Vitruvian Man'?, Did Leonardo copy famous sketch?, There's a convincing argument that the artist's friend made a similar sketch ... first, Leonardo da Vinci's drawing of a male figure perfectly inscribed in a circle and square, known as the "Vitruvian Man," illustrates what he believed to be a divine connection between the human form and the universe.
Beloved for its beauty and symbolic power, it is one of the most famous images in the world. However, new research suggests that the work, which dates to 1490, may be a copy of an earlier drawing by Leonardo's friend.
Another illustration of a divinely proportioned man — the subject is Christ-like, but the setting is strikingly similar to Leonardo's — has been discovered in a forgotten manuscript in Ferrara, Italy.
Both drawings are depictions of a passage written 1,500 years earlier by Vitruvius, an ancient Roman architect, in which he describes a man's body fitting perfectly inside a circle (the divine symbol) and inside a square (the earthly symbol). It was a geometric interpretation of the ancient belief that man is a "microcosm": a miniature embodiment of the whole universe. Leonardo and other scholars revived this vainglorious notion during the Italian Renaissance.
After decades of study, Claudio Sgarbi, an Italian architectural historian who discovered the lesser known illustration of the Vitruvian man in 1986, now believes it to be the work of Giacomo Andrea de Ferrara, a Renaissance architect, expert on Vitruvius, and close friend of Leonardo's. What's more, Sgarbi believes Giacomo Andrea probably drew his Vitruvian man first, though the two men are likely to have discussed their mutual efforts.
Sgarbi will lay out his arguments in a volume of academic papers to be published this winter, Smithsonian Magazine reports.
The key arguments are as follows: In Leonardo's writings, he mentions "Giacomo Andrea's Vitruvius" — seemingly a direct reference to the illustrated Ferrara manuscript. Secondly, Leonardo had dinner with Giacomo Andrea in July 1490, the year in which both men are thought to have drawn their Vitruvian men.
Experts believe Leonardo would have probed Giacomo Andrea's knowledge of Vitruvius when they met. And though both drawings interpret Vitruvius' words similarly, Leonardo's is perfectly executed, while Giacomo Andrea's is full of false starts and revisions, none of which would have been necessary if he had simply copied Leonardo's depiction.
Other scholars find the arguments convincing.
"I find Sgarbi's argument exciting and very seductive, to say the least," said Indra McEwen, an architectural historian at Concordia University who has written extensively about the works of Vitruvius. "But [I] would opt for the view that Giacomo Andrea and Leonardo worked in tandem, rather than Leonardo basing his drawing on Andrea's."
Rather than competitors, the two Renaissance men were colleagues working together to bring a beautiful, ancient idea back to life.
"Whose was the 'original' drawing is a non-question as far as I'm concerned. Much as it is a preoccupation of our own time, I don't think it would have been an issue in Leonardo's day," McEwen told Life's Little Mysteries.
Patrice Le Floch-Prigent, an anatomist at the University of Versailles in France who has analyzed the anatomical correctness of Leonardo's famous work, noted that, for both drawings, "the source is Vitruvius."
Furthermore, regardless of their chronology, Leonardo's work is an improvement on Giacomo Andrea's, McEwen said: "Leonardo is by far the superior draftsman, with a far superior understanding of anatomy."
Leonardo's is also more faithful to the text, she explained.
"Nowhere does Vitruvius say that the man is positioned inside the circle and the square at the same time. 'A man lying flat on his back, can be circumscribed by a circle if his hands and feet are outstretched,' writes Vitruvius. Similarly, his height is equal to his arm span, 'just as in areas that have been squared with a set square.'"
Giacomo Andrea's figure has only one set of arms and legs, which are simultaneously circumscribed by a circle and outlined by a square, while "Leonardo deals with [the two propositions] by having the position of his man's arms and legs change. That, I would have to admit, makes his drawing a closer approximation to the textual description than Giacomo Andrea's," McEwen wrote.
One thing is certain. The better Vitruvian man gained international fame, while the simpler but possibly more original one was left to languish in a library for five centuries. That may have to do with the very different fates met by Leonardo and Giacomo Andrea. When the French invaded Milan in 1499, the former fled to safety and went on to achieve eternal renown. The latter stayed in Milan and was hanged, drawn and quartered by the French, and largely forgotten by history — until now.
via: msn
Posted by News Hump at 10:35