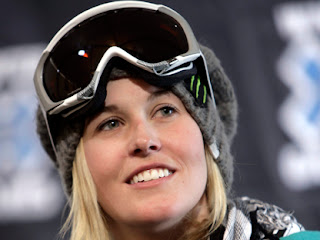 $550K bill for Burke's family, Burke's family gets $550K medical bill, Sarah Burke's medical bills necessitate donations, Concerns about the financial burden on the family of freestyle skier Sarah Burke quickly dissipated Friday and talk turned to how best to honour the legacy of the halfpipe pioneer.
Donations to a fund set up by her agent, Mike Spencer, had, by late afternoon, reached nearly $200,000, which was the “clarified” figure for the medical expenses incurred during the X Games star’s nine days of care at the University of Utah hospital.
Burke, a 29-year-old resident of Squamish, B.C., passed away Thursday after sustaining irreversible brain damage as a result of a fall in training on a superpipe at Park City. One of the major arteries carrying blood and oxygen to the brain ruptured.
Spencer, in a release issued through the Canadian Freestyle Ski Association, said that once Burke’s medical bills are paid, further contributions to the fund will be used “to establish a foundation to honour Sarah’s legacy and promote the ideals she valued and embodied.”
A tireless campaigner for putting female athletes on equal footing, Burke also supported many camps for young skiers.
There was considerable confusion and misplaced Twitter and Facebook vitriol earlier Friday because of reports a day earlier that the fund was looking to raise $550,000, a number several media outlets took as the full medical costs the family was facing.
With the family having declined all interview requests, the confusion only intensified with the uncertainty surrounding what, if any, insurance coverage Burke had.
The CFSA has a comprehensive insurance policy for all its athletes, but only covers them for training and competition that is part of the association’s sanctioned program, including World Cups, world championships, X Games and the pro Dew Tour circuit.
But Burke was injured Jan. 10 at an event organized by one of her sponsors, Monster Energy Drink, with no Canadian coaching staff present. When Monster management offered only “no comment” on Friday morning in regards to any questions about Burke’s death, likely at the behest of lawyers, it led to condemnation on Twitter from users with no knowledge of Monster’s obligation.
Later Friday, Monster issued a statement saying it was deeply saddened by the passing of an inspiring, all-around role model who epitomized “the essence and spirit of why we do what we do.”
The company said it was working directly with Burke’s family to “assess their needs and are committed to helping them financially.”
Spencer said in his statement that based on early estimates received from the hospital on Friday morning, the medical expenses are expected to be in the $200,000 range.
“Once charges are finalized, the university will work with Health Canada to determine what type of coverage may be available and what their contribution will be, as Sarah is a Canadian citizen.”
Spencer said the family — Burke’s husband, Rory, and her parents, Jan and Gordon — continue to be grateful for the outpouring of support and contributions, and grateful to the hospital for “helping them understand and resolve questions relating to billing.”
Meantime, tributes continued to pour in from around the world for the outgoing, personable Burke, a passionate advocate for her sport. She is credited with pushing the X Games to finally include a women’s superpipe competition and was at the forefront of the battle to get the discipline into the Olympic Games.
“It is with enormous sadness that I learned of the death of Sarah Burke,” IOC president Jacques Rogge said in a statement. “She was a fine athlete doing the sport she loved. Our thoughts are with her family and friends at this time.”
Superpipe skiing will debut in 2014 at Sochi, where Burke likely would have been a favourite for the gold medal.
Outfitting the Canadian ski team with black arm bands at the 2014 Games was one of six options on a cbc.ca poll asking how Burke should be honoured. By mid-afternoon, it was the choice of 120, or 13.5 per cent, of those who had responded.
The overwhelming favourite option — 41.7 per cent of respondents — was to have the federal government create a scholarship for female athletes in her name.
via: MG
Posted by News Hump at 04:40