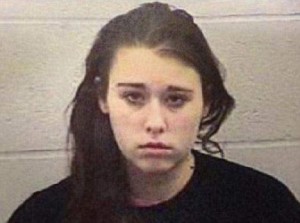 Day care worker allegedly tapes toddler to mat for nap, Toddler taped to floor?, Woman taped kid to the floor?, Daycare Worker Tapes Toddler To Mat (PHOTO), A northern Kentucky day care worker has been arrested and fired from her job for allegedly taping a toddler to a mat during nap time. Police arrested 20-year-old Alicia Lyons on Wednesday and charged her with first-degree criminal abuse. She was released from the Kenton County jail Thursday, The Kentucky Enquirer reported.
Police say Lyons and another employee duct taped a child to a sleeping mat to get him to go to sleep.
Ludlow police chief Wayne Turner said the incident happened in October when the child was about 18 months old. The child's parent told police Wednesday, Turner said.
Lyons was fired from Mustard Seeds Child Care in Ludlow on Thursday. The center said in a statement the incident was isolated and that it is cooperating with police and state officials.
via: fox
Posted by News Hump at 05:17