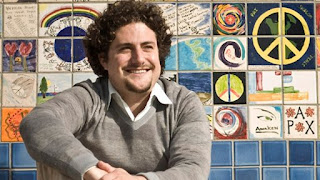 Man's $400 million Facebook 'mistake', Causes Founder's $400M Facebook 'Mistake', Joe Green's attempt to stay out of trouble in college ends up costing him a fortune. Joe Green is most likely the Facebook roommate you've never heard of, but the Harvard graduate is trying to make a difference in the world, with friends.
Green lacks the name recognition of company co-creator Mark Zuckerberg , or even Eduardo Saverin, who famously helped launch Facebook, although he was there with the Internet entrepreneurs in that dorm where the social media powerhouse was born. And he walked away from it.
Green was one of Zuckerberg's roommates at Harvard University in 2004, and was asked by the young man, who is now worth an estimated $17.5 billion, to drop out of the Ivy League school to join him in building the social media website, which is expected to file for an initial public offering this week.
After the two had gotten into some hot water with Harvard for a previous project -- the "hot-or-not" website Facemash, the building of which was dramatized in Oscar-winning film "The Social Network " -- Green ultimately told Zuckerberg "no" because the school had threatened him with expulsion.
His decision not to join Zuckerberg could now be considered a $400 million mistake.
"We'd gotten into a little bit trouble with the previous project ... and my father, who's a professor, was not too happy with the prospect of me getting kicked out of school," Green told ABC News. "Zuckerberg likes to make fun of my dad for this, but we're still very close."
Rather than following Zuckerberg and his team to Silicon Valley, Green followed his passion for politics and worked for John Kerry's failed 2004 presidential campaign.
Now, despite his initial decision, he's back in the Facebook fold, running a for-profit business called Causes, a Facebook application and website that lets friends suggest to friends a charity, social cause and even political candidate. The stated goal of Causes is "to empower anyone with a good idea or passion for change to impact the world."
"The way to get people civically engaged, not just during the election but throughout the year, is to tap into Facebook and let them do it with their friends," Green says.
In increasing numbers, political candidates and campaigns are turning to social media to win elections. As President Obama proved in 2008, social media has become a powerful political tool that can mobilize voters.
"You can't ignore it," Green says. "It's like ignoring television or ignoring, you know, mail. It's become such an integral part of people's lives."
Green says his company has helped raise $50 million for 50,000 charities, while Causes' Facebook page boasts 6.5 million active monthly users.
The New York Times reported in December that Causes received $9 million in venture capital financing, bringing its total financing to $16 million.
Green, the roommate who said "no" to what became a Web behemoth, has no regrets, although he does have plenty of Facebook stock, and he's found his own cause.
"Everyone has the ability inside of them to make a difference," Green said.
via: yahoo
Posted by News Hump at 10:43