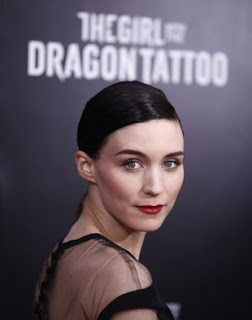 Rooney Mara’s Super Bowl Connection. Star's unusual Super Bowl connection, Rooney Mara is just as invested in the big game as she is in winning the best-actress Oscar. February is a big HUGE month for actress Rooney Mara. Not only is the "Girl with the Dragon Tattoo" star up for a Best Actress Oscar on the 26th, but the New York Giants, the team that was founded by great-great-grandfather Tim Mara, is in the Super Bowl.

The Giants are still very much a Mara-centric team. Rooney's father, Chris Mara, is the senior vice president of player evaluations. His father (Rooney's grandfather) Wellington Mara served as owner until his death in 2005. Currently, John Mara (Rooney's uncle) is 50% owner of the Giants. He also serves as the team's president and CEO.

However, Mara’s father is conflicted about his priorities this February, and is likely going to be watching the red carpet more closely than the football field. On the morning of the Oscar nominations, “I let out a pretty big scream,” he told ESPN.com. “And then I cried. I thought she was on the bubble because the category was so tough this year. It was a very tough role for her, and a lot of hard work went into it, so this is her Super Bowl.”

Mara is what some fans call “Super Bowl royalty” because her mother also has a football connection. Mara’s grandfather on that side, Art Rooney, Sr., founded the Pittsburgh Steelers. The Steelers’ chairman emeritus, Dan Rooney, is her great-uncle.