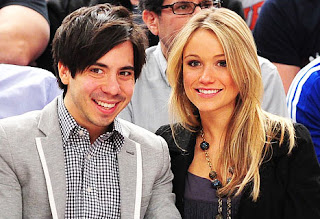 30 Rock Star Katrina Bowden Is Engaged, Ben Jorgensen proposed to his girlfriend of nearly two years Saturday, Katrina Bowden hit the red carpet at Sunday's Screen Actors Guild Awards with a very special accessory: an engagement ring!
The 30 Rock star's boyfriend, Ben Jorgensen, proposed Saturday night, her rep tells Us Weekly. The New Jersey natives were friends growing up and began dating nearly two years ago.
"It just happened last night. I'm very excited to show it off today," Bowden, 23, told E! News' Giuliana Rancic on the red carpet.
"He proposed and showed me the ring. I was so shocked that I just said, 'Oh my God!' and I hugged him and he said to me, 'So is that a yes?'" Bowden recalled. "He picked it out all by himself."
The proposal took down "in a beautiful suite at the Four Seasons," Jorgensen said. "It was just the two of us all day and I was like, 'What better time than this?'"
Bowden turned heads at the Screen Actors Guild Awards in a strapless champagne gown with a floral beaded tulle overlay by Amsale, Stuart Weitzman heels and a Judith Leiber handbag.
via: um
Posted by News Hump at 23:04