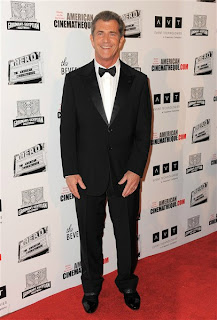 Mel Gibson Clashes With Photographer, Mel Gibson confronted a photographer on Tuesday night after his friend fell to the ground trying to prevent the snapper from taking shots of the star. The "Mad Max" actor was pursued by a paparazzo in Malibu, Calif., and his pal attempted to deter the cameraman, but ended up falling to the ground when they collided.
In video footage of the incident taken by TMZ, Gibson shouts at the photographer, "Hey, stop running around, dude. I saw you attack him."
The photographer insists, "I didn't attack him. He attacked me."
Addressing his friend, the actor adds, "Call the cops and report that this guy assaulted you. I saw him do it."
Gibson's pal repeatedly tells the photographer, "You ran into me!" while he denies it.A member of Gibson's party is reported to have called police, but no report of a crime had been filed as WENN went to press.
via: msn
Posted by News Hump at 05:22