Massive game controller the biggest ever

Massive game controller the biggest ever 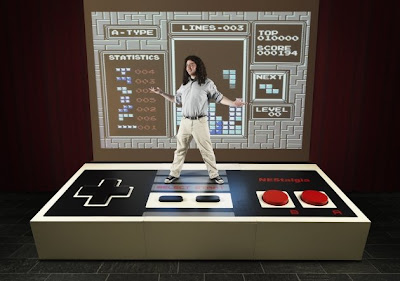 Massive game controller the biggest ever, Massive NES controller is the biggest ever. An oversize creation built by engineering students is recognized as a Guinness world record. And you though the Xbox controller was hefty.
A group of engineering students has put oversized gamepads to shame by building what Guinness World Records has officially dubbed the World's Largest Game Controller.
Built by engineering students from the Delft University of Technology in the Netherlands, this beast is over 12 feet long, roughly 30 times the length of the original NES controller on which it's based. It's housed in steel framing strong enough to withstand people literally jumping up and down on the 'A' and 'B' buttons. And since it weighs in at a linebacker-like 265 pounds, picking it up and setting it in your lap probably isn't a good idea.
But technically speaking, you could, because the thing actually works.

Yep -- it can be hooked up to a TV. To put its size in perspective, you'd have to stand roughly 150 feet tall to make this look like a normal NES controller. Don't expect to have one of these suckers in your living room, though. It took the team a solid month and $6,000 to build.
The massive gamepad was on display in London's Liverpool Street station to celebrate the launch of the Guinness World Records 2012: Gamer's Edition, which includes a wealth of other outrageous game accomplishments.
via: yahoo
Posted by News Hump at 22:44