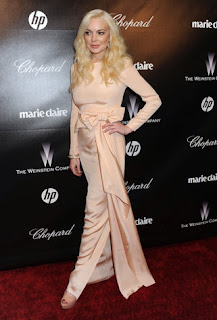 Lohan sued for allegedly hitting pedestrian, Lindsay Lohan sued by pedestrian allegedly struck by star. A woman says she suffered "pain and anguish" after being hit in a crosswalk by the star's Maserati. Lindsay Lohan's bad luck with cars continues after a woman who claims she was struck by the actress' sports car sued over her injuries Wednesday. Nubia Del Carmen Preza claims she was struck by Lohan's Maserati while walking through a West Hollywood intersection in September 2010.
Preza's lawsuit states she has suffered "disabling and serious personal injuries, pain, suffering and anguish" and that she is seeking damages for all her medical expenses and lost time at work. A call to her attorney, Gregory Picco, seeking additional details was not immediately returned.
It is the second lawsuit filed against Lohan this month involving an automobile mishap. A paparazzo sued Lohan Jan. 10, claiming that he was struck in January 2010 by a vehicle in which Lohan was riding. Grigor Balyan claims he was trying to shoot pictures of the actress in Hollywowhen he was hit.
Preza's lawsuit states Lohan was driving when she was hit on the afternoon of Sept. 1, 2010, at an intersection just south of the Sunset Strip. At the time, Lohan lived near the intersection.
Lohan's spokesman Steve Honig said neither Lohan nor her attorneys had been served with the lawsuit and could not comment on it.
The model and actress remains on probation for a 2007 drunken driving case filed after she was arrested twice that year on suspicion of driving while impaired.
One of the incidents sparked two civil lawsuits after Lohan chased a vehicle she thought was carrying her former assistant on Pacific Coast Highway. One of the cases has settled. The other, filed by three men who were in the SUV Lohan was driving, may go to trial in March.
Lohan's attorney in that case, Ed McPherson, has said the men had plenty of chances to get out of the vehicle and called the case "absurd."
The "Mean Girls" star has received two positive probation reports since a judge ordered her to perform weekly morgue cleanup duties in November. the actress may be off supervised probation by the end of March.
via: yahoo
Posted by News Hump at 11:14