Heigl Sizzles on the Red Carpet

Heigl Sizzles on the Red Carpet 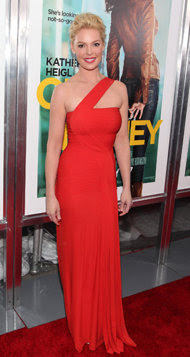 Heigl Sizzles on the Red Carpet, Actress red-hot in one-shouldered gown. Katherine Heigl rocks a curve-hugging dress at the New York premiere of "One for the Money." Katherine Heigl left the hugely successful "Grey's Anatomy" several years ago to focus on her movie career. The results have been mixed ("Life as We Know It," anyone?). Her latest effort is "One for the Money," a comedic action flick based on the book by Janet Evanovich.
Heigl, 33, attended the New York City premiere in a body-hugging gown by Herve L. Leroux. By any estimation, the dress was dazzling. Heigl wore Jimmy Choo heels and earrings from Sethi Couture, with her blond locks in a glamorous updo.
Heigl has expressed regrets about leaving "Grey's Anatomy" back in 2010. On a recent chat with the ladies of "The View," Heigl was asked if she is ever sorry that she left the show. The actress responded: "Oh yeah, sometimes, yeah. You miss it. I miss my friends. It was a great work environment ... and it becomes a family. I spent six years together with these people every day ... you grow up together, in a way."
It wasn't the first time Heigl had expressed a desire to return to Seattle Grace Hospital. Last week, Access Hollywood reported that Heigl approached show producers about the possibility of her character, Dr. Izzie Stevens, coming back. "I always thought that there would be an opportunity to go back (to the show) for at least a few episodes to sort of wrap it up in a way that everyone could feel good about. As of now, we're like, 'Where did Izzie go? What is she doing?'"
Heigl may find a return difficult. She did little to endear herself to the show's writers when she refused an Emmy nomination in 2008, claiming that she didn't feel that the scripts she worked made her worthy of a nomination. "I do not feel I was given the material this season to warrant a nomination," she said. An insider later told EW that the writers considered the comment "an ungrateful slap in the face."
So, when it's all said and done, will Katherine Heigl's movie career resemble post-'Cheers' Shelley Long's or post-'Friends' Jennifer Aniston's? The jury's still out. "One for the Money" hits theaters this weekend.
Check out the trailer for 'One for the Money':
via: yahoo
Posted by News Hump at 23:20