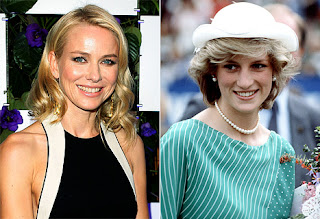 Naomi Watts to Play Princess Diana, New actress to play Princess Diana, The latest star portraying the late Princess of Wales bears an uncanny resemblance. Naomi Watts will soon be morphing into the People's Princess. The Oscar-nominated Australian actress, 43, has been cast as the late Princess Diana in Caught in Flight, an upcoming new biopic.
Directed by Oliver Hirschbiegel and written by Stephen Jeffreys, the film will focus on the last two years in the life of Prince William and Harry's beloved mother; after famously divorcing Prince Charles, Diana reinvented herself as a global humanitarian and was on the path to self-fulfillment before she died at age 36 in an August 1997 car crash.
"It is such an honor to be able to play this iconic role," Watts said in a statement. "Princess Diana was loved across the world and I look forward to rising to the challenge of playing her on screen."
Last November, it was rumored that Oscar nominee Jessica Chastain (The Help, Tree of Life) was attached to Caught in Flight, which also focuses on Diana's relationship with Dr. Hasnat Khan, said to be the love of her life.
Diana met Dr. Khan in 1995, and they embarked on a two-year affair -- breaking up in 1997. Diana rebounded with billionaire Dodi Al-Fayed, who died with her in the tragic Paris car crash.
via: yahoo
Posted by News Hump at 10:00