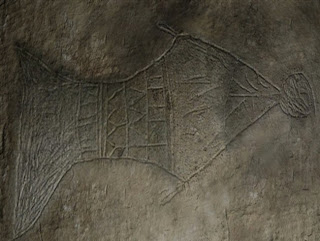 Surprise biblical discovery in Jerusalem, Investigators may have discovered earliest evidence of Christian iconography in Jerusalem, Investigators say they've found the earliest evidence of Christian iconography. Investigators using a robotic arm equipped with a remote-controlled camera have discovered what is being called the earliest evidence of Christian iconography in Jerusalem.
The newly discovered ossuary carries a Greek inscription calling on God to "raise up" someone, which is being interpreted as an early reference to the biblical resurrection of Jesus.
A second limestone box appears to show the carved image of a fish, which may be a reference to the biblical prophet Jonah. This would be a historical first, as references to the resurrection had not previously been discovered before the 2nd century.
"If anyone had claimed to find either a statement about resurrection or a Jonah image in a Jewish tomb of this period I would have said impossible -- until now," University of North Carolina scholar James Tabor said in a statement. "Our team was in a kind of ecstatic disbelief, but the evidence was clearly before our eyes, causing us to revise our prior assumptions."
As significant as this discovery is, it may itself be buried under renewed discussion over the potential discovery of a tomb inscribed with the names of the biblical Jesus and his family. The investigators, lead by University of North Carolina scholar Tabor, are the same team who five years ago claimed to have made "The Jesus Discovery."
"This does reopen the whole question about the 'Jesus Tomb," Tabor told MSNBC. Yahoo News contacted Tabor, but is still waiting for a response.
In addition to his efforts on the "The Jesus Discovery," Tabor is also working on a new translation of the Bible, known as the Original Bible Project. He contributed to a controversial TV documentary called, "The Lost Tomb of Jesus," which received significant attention at the time of its release, since it was produced in partnership with Academy Award winning director James Cameron.
The new discovery is actually part of an earlier finding made by Tabor and his team. However, the Israeli government shut down the initial investigation due to protests from local religious groups. A house was built on top of the excavation site, which is now referred to as the "Patio Tomb," because a patio literally rests on top of the site. Tabor and his team were finally able to receive cooperation from the Israeli government by using the robotic technology to explore underneath the site.
"This inscription has something to do with resurrection of the dead, either of the deceased in the ossuary, or perhaps, given the Jonah image nearby, an expression of faith in Jesus' resurrection," Tabor said in the statement, referring to the "raise up" inscription on the ossuary.
"We now have the new archaeological evidence, literally written in stone, that can guide us in properly understanding what Jesus' earliest followers meant by their faith in Jesus' resurrection from the dead — with his earthly remains, and those of his family, peacefully interred just yards away," Tabor and Jacobovici wrote.
However, skeptics say that Tabor is attempting to connect circumstantial evidence to his larger theory of the so-called Jesus Tomb.
"The attempt to connect [the Patio Tomb] to the other tombs is sheer conjecture, unless the tombs were connected," Ben Witherington, a New Testament scholar at Asbury Theological Seminary, told MSNBC.
via: yahoo
Posted by News Hump at 21:54