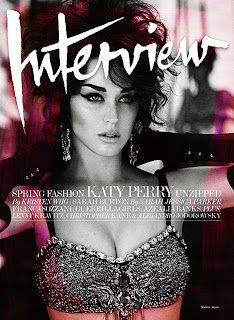 Katy sports dark new look in photoshoot, Katy Perry is unrecognisable in sexy photoshoot for Interview magazine, With the blue bob gone and some Amy Winehouse-style eyeliner flicks, Katy Perry looks dramatically different. Katy Perry, is that you? We barely recognised the newly single singer on this smouldering cover. If Katy wanted to shout loud and clear that she's moving on with her life following her divorce from Russell Brand, then she's certainly doing that.
In the March issue of Interview magazine, Katy has donned a bejewelled bra and vampish make-up in a departure from her fun blue bob and laid-back style.
The 27-year-old oozes the kind of seduction we're more used to seeing from Megan Fox.
This sneak peek comes just days after Katy's ex, Russell was pictured for the first time with his rumoured new girlfriend, Mexican artist Oriela Medellin Amieiro.
The reported couple were seen shopping in West Hollywood on Sunday, while Katy was partying with Elton John at his Oscars viewing party.
via: yahoo
Posted by News Hump at 08:14