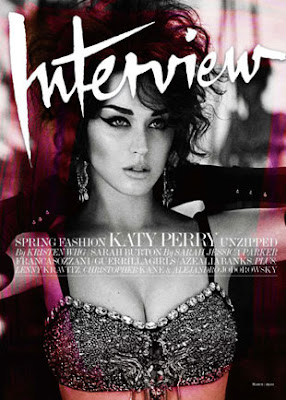 Katy Perry transforms into Megan Fox, PHOTO: Katy Perry transforms into Megan Fox for Interview magazine, The singer gets styled with thick eyebrows and cat-eye makeup on the cover of 'Interview' magazine. Katy Perry has transformed into Megan Fox. The 27-year-old pop star's cover for the March issue of Interview magazine (for which she was interviewed by Kristen Wiig) has been leaked and Perry looked more like Mikaela Barnes than Kathy Beth.
The "Teenage Dream" singer has been styled with thickened eyebrows and cat-eye make-up and gives a smouldering look as opposed to her usual wide-eyed Kewpie doll stare. She also sports a messy up-do, large earrings and a bejeweled top.
Funnily enough, when Megan Fox was a cover girl for Interview back in 2010, the 25-year-old "Transformers" star appeared to steal Perry's look -- Bettie Page hair and heavy make up.
This isn't the first time the two stars have been compared. Several websites have pitted the A-listers against each other (with an accent on their comparable, ahem, assets) with Facebook accounts like "Katy Perry vs. Megan Fox" and "Katy Perry is Hotter than Megan Fox" attracting hundreds of likes.
Back in 2009, ELLE even posted a video on how to apply your own pin-up girl black eye makeup, naming Perry and Fox as major proponents of the style choice.
With Perry turning into Fox, the competition takes a whole new dimension.
via: yahoo
Posted by News Hump at 09:23