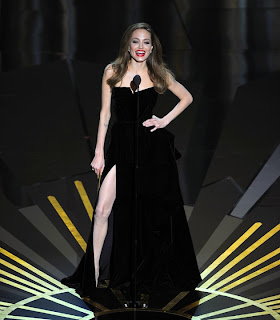 Jolie's leg spawns own instant Twitter account, Angelina Jolie's leg has spawned its own Twitter account, and it's an instant hit. The Twitter feed dubbed "Angie's Right Leg" has more than 12,000 followers by midday Monday. Most of what Jolie's leg has to say is fairly simple-minded. Sample tweets include "I'm a leg!" and "Look at the leg!"
At the Oscars, Jolie's glamorous black dress featured a split by her right leg. She appeared to accentuate it while presenting the award for best adapted screenplay.
One of the winners of that category, "The Descendants" co-writer Jim Rash, mocked the pose while accepting his award.
via: yahoo
Posted by News Hump at 11:59