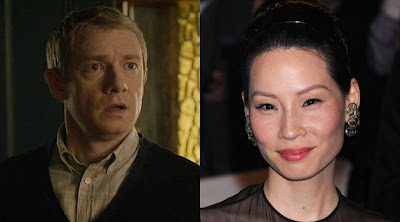 Actress Lucy Liu nabs Watson role in US Sherlock, Lucy Lui to play Watson in US Sherlock – Daily TV round-up, Speak of a surprising twist: Lucy Liu has been picked to play Dr Watson in the US remake of the sleuth tales. Lucy Lui is set to play Dr Watson to Jonny Lee Miller's Sherlock Holmes in the US take on the Arthur Conan Doyle tales.
Lui, star of films like 'Kill Bill' and 'Charlie's Angels', will take on the role of Joan Watson in the new CBS drama 'Elementary'.
And more details have emerged about the plot too.
As well as being set in modern day New York, it's emerged that Holmes will play a Scotland Yard consultant who has travelled to New York to shake his addiction problems.
The series will pick up with Holmes living in Brooklyn after leaving rehab, while Lui will play a sober former surgeon struck off after a patient died. [Deadline]
via: yahoo
Posted by News Hump at 06:24