Kid Rock rocks out for Romney

Kid Rock rocks out for Romney 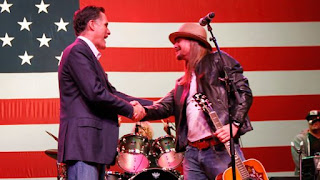 Kid Rock rocks out for Romney, Secret meeting leads to Kid Rock jam session at Romney rally, The bad-boy artist appears at a rally, but only after the candidate agrees to certain conditions. It had all the fixings of a Mitt Romney rally, and then Kid Rock hit the stage. On the eve of the Michigan primary, musician Kid Rock sang a live version of "Born Free," the official campaign song of the Romney campaign and a song that, until tonight, has only been heard in its recorded version, blaring through speakers at events from New Hampshire to Iowa to South Carolina, and everywhere in between.
"The other day I got in my car and I drove out to a home of a fellow that lives in this area, and I asked him whether he might come here tonight," said Romney, standing on a stage at the Royal Oak Music Theatre, surrounded by subwoofers and a drum set, the replica of the debt clock he so often uses to tout his economic dexterity was nowhere to be seen.
"I think you know him pretty well. He's a native son of Detroit, loves Michigan, loves Detroit. He's recently made quite a commitment - he said he's going to raise a million dollars for (the) Detroit symphony. He put a piece of paper in front of me. He'd written down some questions for me. He said first of all, he said, 'Mitt, if you're elected president, will you help me help the state of Michigan?' And I said I would," said Romney, teasing Kid Rock's performance that had only been described as a "surprise musical guest" in campaign advisories.
The odd couple - Romney a squeaky clean family man who obeys the pillars of his Mormon faith, and Kid Rock, a Hollywood bad boy who has a sex tape and a criminal record - apparently met last week behind closed doors, when Romney went to the singer's suburban Michigan home on February 23.
The meeting lasted for about an hour, according to a campaign aide, who described it as a "warm and friendly conversation" during which the two discussed their "similar interests," including Romney's commitment to Michigan, Detroit and the troops. Kid Rock recently pledged to play a charity concert to raise $1 million to go toward saving the Detroit Symphony Orchestra and Romney has pledged his support of the state of Michigan again and again on the stump.
According to the aide, a representative from the Romney campaign had reached out to the musician, whose birth name is Bob Ritchie, when the Michigan campaign schedule began to finalize, requesting a live appearance after getting permission to play the audio of the song months earlier.
But Kid Rock insisted on meeting Romney in person, the aide said, a get-together that was attended by the candidate and at least one senior advisor. The day after the meeting, February 24, Kid Rock e-mailed Romney on his personal e-mail address and agreed to perform at tonight's rally.
Romney himself characterized the conversation with Kid Rock in his introduction to the singer this evening, recalling how the singer didn't agree to perform until he made some promises too.
"He said, 'If you're elected president, will you help me help the city of Detroit?' I said I would. And then I turned to him, and I said, 'By the way, given the fact that I'm willing to do those things, will you come here and perform a concert tonight for my friends, and he said he would," said Romney. "So I'm happy to introduce a son of Detroit, a friend, a guy who makes great music, who introduces me by DVD everywhere I go - Kid Rock!"
As Kid Rock belted out the lyrics to "Born Free," Romney and his wife Ann stood and listened, tapping their feet, clapping and whistling in support.
Jumping back on stage after the song, Romney shook hands with Kid Rock and the musician kissed Ann on the cheek, the trio exchanging pleasantries as the crowd of hundreds cheered and the rest of the band began to put their electric guitars back in cases, readying to jump on the road for their next gig - -scheduled in a few days in Texas.
Turning to address the crowd for one more time before polls open tomorrow morning, Romney's microphone wasn't turned on, forcing him - after some coaxing from Ann - to take Kid Rock's microphone.
"Not to be confused with the real artist," Romney quipped. "Thanks, you guys. It's great for you to be here. I appreciate it so much. Thanks to Kid Rock. Thank you to Kid Rock and to his band. These guys did a great job. Real kind of them."
"You guys, thank you so very much. We love you. Thank you. Have a great night. See you tomorrow, and a big victory."
via: yahoo
Posted by News Hump at 22:41