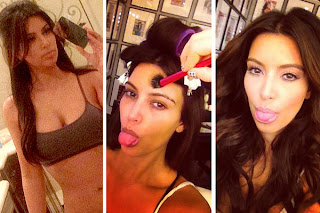 Kim Kardashian Tweets ‘Before & After’ Makeup Pics, Though Kim loves to glam it up with a hefty amount of makeup, she’s never shy to show off her bare face. Kim Kardashian Tweeted her “Before & After” looks as she is being made up and the post-makeup application look. Then, just a few hours later, she Tweeted another no makeup (and no shirt!) picture again, saying, “Sweatpants hair tie chillin with no make up on.” Do you love that Kim doesn’t mind showing off her casual sweatpants style?
For a celeb that loves her hairspray and fake lashes, it’s pretty surprising that Kim also often shows off her fresh face on Twitter and as she goes to and from the gym. It’s nice that Kim lets her fans know that she’s just like us, sometimes getting glam and sometimes just lounging without even a swipe of lip gloss.
via: hl
Posted by News Hump at 08:01