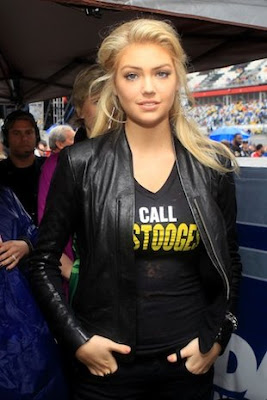 Kate Upton isn’t a highway speed demon, Swimsuit model's surprising car claim, Kate Upton, who was in Daytona before the NASCAR race, is an unusually safe driver. Swimsuit model Kate Upton's future probably doesn't lie as a NASCAR driver. And besides, given the current — ahem — track of 2012 Sports Illustrated Swimsuit Issue cover model's modeling career, it's doubtful she'll ever have to consider any other gig anyway.
Upton, the Co-grand marshal of the Daytona 500 along with Glee star Jane Lynch, was asked Sunday morning in the media center how fast she's ever driven on the street.
"I only go five miles an hour over the speed limit," Upton said.
"Probably 80 (is the fastest). It's faster here in Florida. They let us drive faster. No snow."
She's no Ryan Lochte or Kyle Busch.
Olympian swimmer Lochte, the grand marshal for the first Gatorade Duel on Thursday, said he's driven 175 mph on the highway. Kyle Busch was cited in May driving 128 mph in a 45 mph zone.
Upton and Lynch are promoting their new movie "The Three Stooges" which premieres April 13.
via: yahoo
Posted by News Hump at 09:24