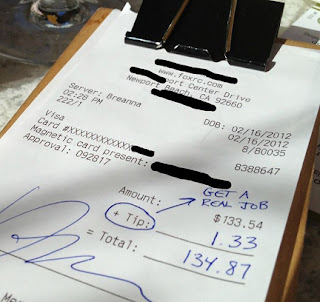 Wealthy banker's 1% tip said to be hoax, Update: Banker’s Insulting Waitress Tip Is a Hoax, A California restaurant says an insulting receipt that outraged the Web has been doctored. Yesterday we reported a story about a banker who allegedly left a $1.33 tip on a $133 lunch bill at True Food Kitchen in Newport Beach, California. The story was shared all over the Web, and we received thousands of comments about the insulting remark written on the receipt.
New developments suggest that the receipt from the restaurant may have been digitally altered. According to the website the Smoking Gun, True Food Kitchen's spokesperson said it found the original merchant copy of the receipt, and the one circulating the Internet was "altered and exaggerated." The original receipt does not contain the tip "Get a real job." Also, the real bill was for $33, not $133, and the tip given was $7.33, not $1.33.
The blog that originally posted the receipt, Future Ex-Banker, was taken down Friday as well. However, even though the restaurant has come forward with this information, people are still skeptical. People on social media are demanding to see the undoctored version of the receipt from the restaurant.
The Trending Now team contacted the restaurant and its spokesperson Jamie Reagan told us the receipt was doctored. Reagan said the reason that the issue was not corrected more quickly is because the corporate offices were closed over the weekend.
via: yahoo
Posted by News Hump at 10:39