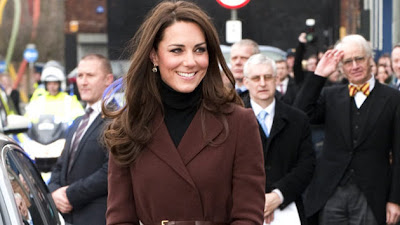 Kate Middleton Turns Fashion Judge for Queen's Jubilee, Kate Middleton has been hitting the pavement, making waves in solo appearances at charity and society events while her husband, Prince William, is away on a six-week Royal Air Force deployment.Now the 30-year-old Duchess is trading in her well-heeled pumps for a new role as fashion judge, and getting her own, custom-designed pair of shoes in the process.
Middleton is now reviewing shoe designs submitted to her by six students enrolled in the elite footwear design program at De Montfort University in the English city of Leicester. The students caught the Duchess' eye, and feet, after a competition that winnowed the field from 100 submissions to just six.
The process, with its shades of Cinderella, will conclude March 8, when Middleton visits the university to announce in person which shoe design is her favorite. The winning design will then be made especially for the Duchess to wear on future occasions.
"When asked who their first commission was for at their first job interview, they will be able to reply: 'The Duchess of Cambridge, the world's leading fashion icon,'" said Dominic Shellard, the university's vice-chancellor.
Middleton will make the trip to Leicester with Queen Elizabeth and Prince Philip as part of the Queen's Diamond Jubilee tour to celebrate her 60 years on the throne.
The event will mark another milestone as well: the first time Kate and the 85-year-old Queen have attended a public engagement together, the Daily Mail reports.
Middleton has cemented her status as a fashion icon since marrying William last April, but the student's shoe designs will likely be something beyond the classic pump or casual rain boots the Duchess, known for her accessible fashion sense, is often seen wearing.
The six students - Sam Sawkill, 27, Summer Spencer, 23, Kay Yeng Cheng, 22, Tabitha Duffield, Becka Hunt, 20, and Mei Chun Lai, 21 - said they drew inspiration for their designs from everything from Middleton's personality, to her sapphire engagement ring to 18 th century fashion.
A first glimpse at the design submissions shows everything from daisies to pink leather to tartan plaid.
Middleton has so far stayed mum on the new, albeit temporary, fashion gig. She and the Queen will also watch four of the university's fashion graduates showcase their collections and will also join Prince Philip in attending a church service at the city's cathedral.
via: yahoo
Posted by News Hump at 05:34