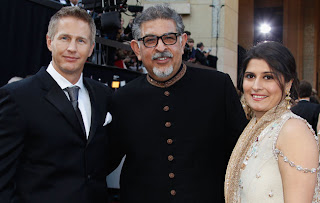 Brutal story behind Oscar-winning film, ‘Saving Face’ Documentary Shines Light on Acid Attacks, The short “Saving Face” sheds light on the harrowing subject of acid attacks against women. It's easy to think of the Oscars as just an evening of self-congratulatory fluff. But every once in a while, the Academy pays attention to a film with the power to really change lives. Pakistan's "Saving Face," this year's winner for Best Documentary Short, is one of those rare achievements.
The 40-minute documentary focuses on the senseless acid attacks against women in Pakistan. Each year, more than a hundred women have acid thrown in their faces, ruining their lives and causing both physical and emotional devastation. The film, which will air on HBO on March 8, focuses on two of these women, as well as plastic surgeon Mohammad Jawad who returns to his homeland to help the victims in their recovery.
After the film's victory at the Oscars, a first for Pakistan, co-director Sharmeen Obaid-Chinoy, 33, gave a stirring speech in which she dedicated the film to "all the women in Pakistan who are working for change." She continued, "Don't give up on your dreams." Sandra Bullock appeared to be near tears during the speech. American Daniel Junge was the film's co-director.
Web interest in the film immediately jumped after the Oscar win. Yahoo! searches for the film surged an astounding 3,362%. Related lookups on "saving face oscar" and "saving face documentary" posted impressive gains as well. Clearly people wanted to understand more about the history of the attacks and the reasoning, however twisted, behind them.
According to the film, the majority of the attacks are carried out by enraged husbands or rejected suitors. The AP reports that in 2010, at least 8,000 incidents of violence against women, including forced marriages, were reported in Pakistan. That number is likely low, as some victims do not report the crimes. Some victims of acid attacks stay with their husband-attackers out of fear for their children.
While the Academy Award is as prestigious an award as any filmmaker can receive, Obaid-Chinoy and Junge can probably take even more pride in the fact that their creation is raising awareness about a shocking kind of violence. And even though the film doesn't put Pakistan in a positive light, the country's prime minister, Yusuf Raza Gilani, says the nation would confer on Obaid-Chinoy "the highest civilian award upon her return," according to MSNBC.
via: yahoo
Posted by News Hump at 21:25