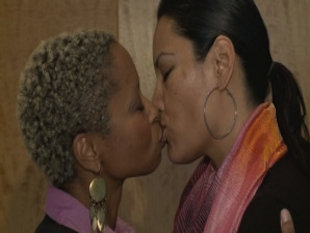 Restaurant apologizes to lesbian couple, Lesbian couple gets an apology and free drinks after being booted from Arizona restaurant, The duo's ejection from an Arizona establishment for kissing sparked Internet outrage. Kenyata White and Aeimee Diaz were celebrating their anniversary at the American Kitchen & Wine Bar in downtown Phoenix this week when they were suddenly asked to leave the restaurant for "inappropriate behavior." But after an uproar on Facebook and other social media sites, the lesbian couple has been welcomed back with open arms -- and free drinks. A Lesbian couple is kicked out of a Downtown hotel after sharing a kiss:
The Arizona Republic reports that the couple was asked to leave the restaurant, which is in the Sheraton Phoenix Downtown Hotel, after the two women were seen hugging and kissing at their table. A manager approached them to tell them their behavior was "inappropriate," and making other customers "uncomfortable."
"My partner and I were reminiscing," White told the Arizona Republic. "I had my arm around her neck, and she had her hand around my waist. I gave her a hug for about a minute, pulled myself away to give her a quick kiss, and then we continued talking."
White posted about the incident on her Facebook page and received an overwhelming response of support from the online community. Representatives of the hotel then met with the couple to apologize for the incident.
"We had the opportunity to meet with the couple late (Tuesday) to listen to their story and better understand their view and how they felt," hotel General Manager Leo Percopo said in a statement. "We had a collaborative conversation, and both parties are taking this incident seriously. Together, we have identified opportunities in which both parties can unite and work together to foster diversity awareness."
White said the couple was not only invited back the next day, but offered free drinks as partial recourse.
Phoenix Mayor Greg Stanton also posted on his Facebook page about the incident, writing: "In our city, diversity is our strength and we support our LGBT friends, family and neighbors. We fully expect the Sheraton, which also has committed their support to our LGBT community, to work with Equality Arizona and resolve this issue in a professional way with their staff. Let's be completely clear -- Phoenix is a gay-friendly city and we welcome the LGBT community, not only because it is good business but also because it's the right thing to do."
This was not the only incident of public discrimination to impact a lesbian couple this week. The Washington Post reports that a woman attending her mother's funeral at St. John Neumann Catholic Church in Gaithersburg, Maryland, was denied communion when the Rev. Marcel Guarzino told Barbara Johnson that she and her partner were living in sin. Guarzino then walked out on Johnson's eulogy and did not attend burial services. While Johnson has received a formal letter of apology from another member of the church, she said she is still insisting that Guarzino be removed from the parish.
Still, this has also been a week of positive news for gay and lesbian couples. Yahoo! News' Liz Goodwin wrote on Monday about a gay Marine's homecoming kiss that has since gone viral.
via: yahoo
Posted by News Hump at 21:43