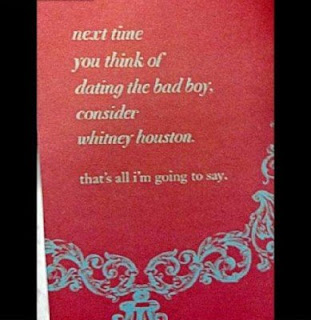 Controversy over Whitney Houston card, Tasteless Whitney Houston Greeting Card Pulled From Target, A greeting card that makes a rude reference to the late singer’s personal life is pulled from stores. Target retailers have removed from its shelves a greeting card that makes fun of Whitney Houston's choices in men. The card's inside text advises women to be more selective when picking mates. "Next time you think of dating the bad boy, consider Whitney Houston," the card reads.
Jordin Sparks: I Taught Whitney Houston How To Dougie
Bobby Brown, Houston's estranged ex-husband, is believed to be the inspiration behind the card's "bad boy" reference. Houston and Brown were married for 14 years and divorced in 2007. Houston had accused Brown of domestic violence, and some blame Brown for Houston's downward spiral.
A backlash began when a picture of the card appeared on Reddit.com after Houston's death. The card, however, was released before Houston died.
A spokesperson for Target said the company immediately responded to complaints. "The card was in our stores prior to Ms. Houston's death," the spokesperson told TMZ. "As soon as this was brought to our attention, we began the process of removing the card from all applicable stores."
Kelly Clarkson and Tamyra Gray Sing Whitney Houston's "Exhale (Shoop Shoop)"
Houston was found dead in her room at the Beverly Hilton Hotel on February 11.
via: yahoo
Posted by News Hump at 21:19