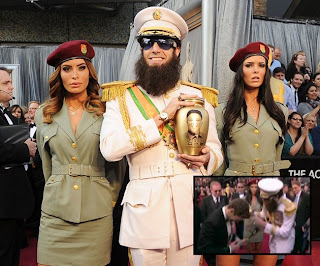 Sacha Baron Cohen's outlandish moments, Sacha Baron Cohen Craziest Moments, The eccentric actor added a page to his resumé when he arrived at the Oscars in full dictator regalia. The most outlandish stunts from the star of "Borat," "Bruno" and "The Dictator."

When you first saw Sacha Baron Cohen on the Oscar red carpet, in costume and in character for his upcoming film “The Dictator,” you had to know trouble was brewing. Ryan Seacrest certainly should have seen it coming. Or maybe he wasn’t aware of all of Cohen’s previous stunts. Either way, Seacrest ended up with a tux covered in what Cohen claimed were the ashes of deceased North Korean leader Kim Jong Il.
If you’re ever interviewing people on a red carpet, don’t make the same mistake as Ryan. Beware of your enemy, and get to know Cohen’s antics. Here are some of his most outlandish. Believe us, ashes are tame.
less 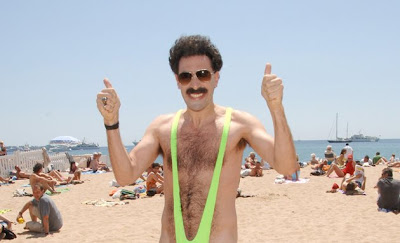 Cohen arrived at Cannes in 2006 with his film “Borat: Cultural Learnings of America for Make Benefit Glorious Nation of Kazakhstan” while sporting a lime green sling mankini. The film, of course, went on to become a monster hit, but he didn't do much to boost swimwear sales. 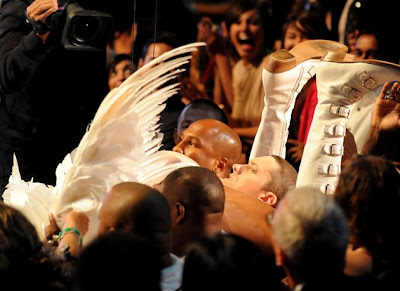 At the 2009 MTV Movie awards, to promote his film “Bruno,” Cohen put on angel wings and a fashionable jock strap to fly above the audience. Much to most everyone’s surprise, he fell from the sky and into Eminem’s lap in a most uncompromising position. Eminem stormed off in a huff, causing viewers to ask if the rapper was in on the joke (don’t worry, he was). 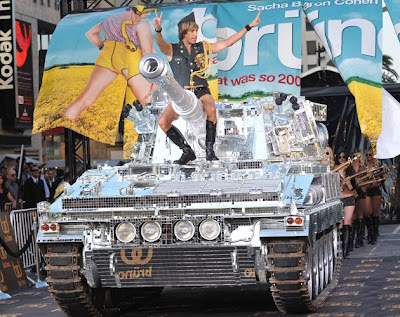 Dressed in knee-high boots, leather hip huggers, and fabulous army regalia, Cohen, again in character, showed up to the Los Angeles “Bruno” premiere riding a giant mirrored tank that resembled a dangerous disco ball. While folks in Hollywood are used to some wild sites, Bruno and his army of beautiful machine gun-toting models definitely raised a few eyebrows. 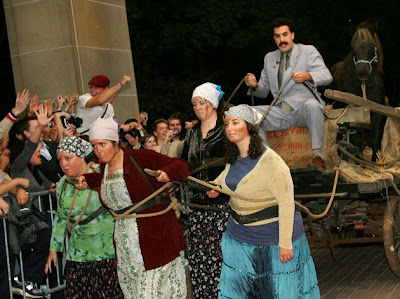 At the Toronto Film Festival premiere of “Borat”, Cohen made yet another unique entrance. Arriving in a cart would have been unique in its own right, but only a cart pulled by four of his wenches would do for Borat. When the projector at the premiere went down, Borat offered the crowd "five minutes for sex-making with my nice cart-pull prostitutes."
via: yahoo
Posted by News Hump at 21:45