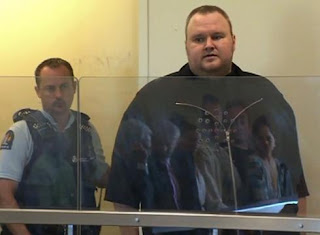 Megaupload founder Kim Dotcom released on bail, The founder of the file-sharing website Megaupload was granted bail and released on Wednesday after a New Zealand judge determined that authorities have seized any funds he might have used to flee the country. Kim Dotcom, who U.S. authorities allege facilitated millions of illegal downloads through his company, has been in custody since his arrest Jan. 20.
Magila Annandale, a spokeswoman for the Ministry of Justice, said the ministry was seeking details on the conditions of Dotcom's release. District courts in New Zealand typically don't require a monetary bond when granting bail.
U.S. authorities claim Megaupload cost movie makers and songwriters some half a billion dollars in lost copyright revenue. They are trying to extradite Dotcom, 38, and three of his colleagues on racketeering charges.
New Zealand authorities have seized millions of dollars in investments and assets owned by Dotcom, including luxury cars and artworks.
North Shore District Court Judge Nevin Dawson found that the German-born Dotcom no longer posed a significant flight risk because, as far as the court was aware, he wasn't hiding any money or assets that could help him flee the country. New Zealand courts had earlier turned down Dotcom's bail application and a subsequent appeal, saying he did pose a flight risk, but Dawson said those decisions were made when details about Dotcom's assets remained unclear.
"Since that time, all known assets have been seized and are unavailable for Mr. Dotcom's use or disposal," the judge found. "No new assets or accounts of any significance have been revealed since his arrest. Mr. Dotcom's submission that he has not concealed any assets or bank accounts has largely been borne out."
Dawson also said he received an affidavit from Bonnie Lam, the Hong Kong chief financial officer of Megaupload, supporting Dotcom's contention that he has no resources available to him.
Dotcom was born Kim Schmitz but legally changed his name. He is a citizen of both Germany and Finland and was granted New Zealand residency in 2010. He has also lived in Hong Kong, where the Megaupload company is registered.
Dawson disputed an earlier court finding that the U.S. doesn't have an extradition treaty with Germany.
The judge said there is a German law which prevents Germans being extradited to any country — but that a treaty between Germany and the U.S. would allow Dotcom to be prosecuted in Germany should he flee New Zealand and should German authorities deem prosecution appropriate. He said a similar situation applies to Finland.
Dotcom's colleagues had earlier been granted bail by New Zealand courts.
via: usatoday
Posted by News Hump at 07:42