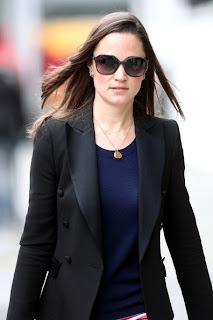 Pippa Middleton to ski 56-mile Swedish X-C race, Pippa Middleton will be strapping on the skis for charity. The sister of Kate, the Duchess of Cambridge, is tackling Sweden's traditional 56-mile (90 kilometer) cross-country marathon on Sunday. Race spokesman Per Strid says Pippa and her brother James are doing the Vasaloppet (VAH-sah-lowpet) race to raise money for the child hunger charity Magic Breakfast.
The Vasaloppet, first held in 1922, is one of the world's oldest cross-country races. It stretches from the village of Salen near the Norwegian border to the central town of Mora. Last year 16,000 people took part.
The race is based on Gustav Vasa's attempt to gather peasants for a revolt against occupying Danes in 1522. Vasa fled after getting no support, but the people of Mora changed their minds and sent their best skiers to bring him back.
via: yahoo
Posted by News Hump at 09:21