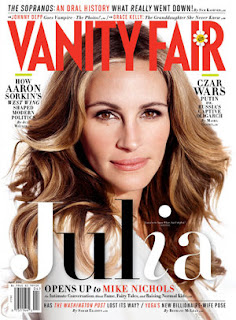 Julia Roberts' grim take on success, Julia Roberts on Fame Today: ‘There’s the Express Elevator and Then There’s Rehab’, The superstar says the road to fame for young actresses today is unfair and filled with danger. It's been more than two decades since Julia Roberts first became America's "Pretty Woman," and since then, the actress says in the April issue of Vanity Fair, Hollywood has become a much grimmer place for up-and-coming stars.
Back when Roberts was starting out, " I was encouraged -- as all young actresses are -- you know, 'You've got to keep going; you've got to get out there,'" she tells the mag. "It's too bad that young actors coming up now will never get that kind of experience. The business is so different; you can never be that new girl that has that moment of 'Where'd she come from?' Those gradual steps that you get to take … "
And if you think the 44-year-old would be willing to trade places with someone half her age now think again. These days, the actress says, "there's the express elevator and there's rehab. It's so awful; nobody gets a fair trial-and-error period that everybody deserves and everybody needs."
In the interview, Roberts, who's made an effort to shield her three children -- 7-year-old twins Hazel and Finn and 4-year-old son Henry -- shares the fact that her kids don't actually understand that she's, well Julia Roberts. Case in point: When the star was out in public with her family recently. "Somebody said as we were walking past, 'Oh, that's Julia Roberts,'" she recalls. "We all just kind of kept going, and then Finn said, 'Yeah, my mom's Julia Robinson.' That's what gives you perspective. It could be Robinson, it could be Johnson, because it has nothing to do with me as a person."
Still, there are times when Roberts clearly worries about the ramifications that come with her kids -- who she's raising with cameraman husband Danny Moder -- growing up as the children of a celebrity. Roberts even recalls talking to one Meryl Streep's daughters, 25-year-old Grace Gummer, about growing up in the same situation, which turned out to be a rather comforting conversation. 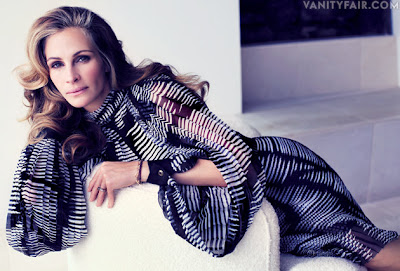 "I asked, 'Were you happy?' Suddenly, I thought, here is a source of information. I said, 'How old were you when you realized your mom was Meryl Streep?'" Roberts recalls. "She said, 'I think I was probably nine when I put that all together.' I said, 'Were you cool with it?' She said, 'Yeah, it was fine. There was no trauma.' So that was hopeful."
The Academy Award winner may be one of the most famous film actresses in the world, but it sounds like she's more excited about getting back to the stage than the screen.
"It's like childbirth: you don't know until you've done it, but you get a little bit away from it and you go, 'Of course, I want to do that again," Roberts explain. "You get sucked back into doing theater, because it's really thrilling."
The April issue of Vanity Fair hits newsstands in New York and L.A. on February 29 and nationwide on March 6.
via: yahoo
Posted by News Hump at 09:48