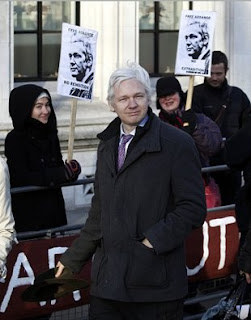 WikiLeaks reveals firm's secret documents, WikiLeaks publishes intelligence firm Stratfor’s hacked emails, but analysts question their value, The alleged emails uncover the inner workings of a company that serves big corporations. On Monday, the anti-secrecy group WikiLeaks began to publish some five million alleged emails and internal documents obtained from the Texas-based private intelligence firm Stratfor. Hackers supposedly seized the firm's internal emails in December.
But despite WikiLeaks' breathless announcement of its latest data dump, many analysts question why the private firm's internal emails were of much value or interest anyway, since the firm examined mostly open-source information widely available in newspaper reports, think tank discussions and university political science departments.
The released Stratfor emails, dating from July 2004 through December 2011, "reveal the inner workings of a company that fronts as an intelligence publisher, but provides confidential intelligence services to large corporations..." WikiLeaks wrote on its website. It named the U.S. Department of Homeland Security, the U.S. Marines and the U.S. Defense Intelligence Agency in addition to some large Fortune 500 companies as places Stratfor serviced. "The emails show Stratfor's web of informers, pay-off structure, payment laundering techniques and psychological methods," wrote WikiLeaks.
Stratfor said in a statement Monday that some of the leaked documents and emails "may be forged or altered to include inaccuracies; some may be authentic," Reuters reported. (Among the phoney emails released was one alleging that Stratfor's founder and CEO George Friedman had resigned, the firm's statement said. He has not.)
While difficult to evaluate, some of the contentions in other released emails appeared questionable.
For instance, one WikiLeaks released email is from a Stratfor analyst named Fred Burton, who responded to a 2010 New York Observer article on the Cordoba Initiative, the group behind the proposed ground zero mosque. The article alleged that some members of the group's board had ties to the CIA.
"The Imam is an operational asset of the FBI," Burton allegedly wrote in the email to other Stratfor counter-terrorism analysts on Sept. 13, 2010.
But a spokeswoman for the Cordoba Initiative told Yahoo News on Monday the claim is "grossly inaccurate" and reiterated "there is no validity to the statement."
Imam Faisal Abdul Reuf "was asked by the director of the FBI New York office to train New York FBI agents on Islam," the statement continued. "There has been no involvement since then."
A spokeswoman with the FBI's cyber crimes division, contacted by Yahoo News, declined to comment on the allegation Monday. A spokesman for Stratfor didn't indicate whether the specific email in question was authentic.
Another group of leaked emails from November 2011 shows Stratfor analysts expressing open skepticism about a contention from an Israeli source that Israel had already destroyed much of Iran's nuclear program:
On 11/7/11 7:54 AM, Benjamin Preisler wrote:
...Publication: for background
Attribution: none
Source Description - Confirmed Israeli Intelligence Agent
Source reliability: Still testing
Item credibility: untested...
Source was asked what he thought of reports that the Israelis
were preparing a military offensive against Iran. Response:
I think this is a diversion. The Israelis already destroyed
all the Iranian nuclear infrastructure on the ground weeks
ago. The current "let's bomb Iran" campaign was ordered by the
EU leaders to divert the public attention from their at home
financial problems. ...
But another Stratfor analyst responds with open incredulity and mocks the above claim as patently ridiculous:
On 11/7/11 8:09 AM, Chris Farnham wrote: Ah, what? Israel has
already destroyed the Iranian prog/infra and this is all being
engineered by Europeans so people forget about the economy
crisis?!
How and when did the Israelis destroy the infra on the ground? [...]
Do we attribute any credibility to this item at all? ...
A FAQ on Stratfor's website said the firm is cooperating with an FBI investigation into the alleged data breach that it said it suffered in early December. The FBI spokeswoman declined to comment on the investigation.
via: yahoo
Posted by News Hump at 05:59