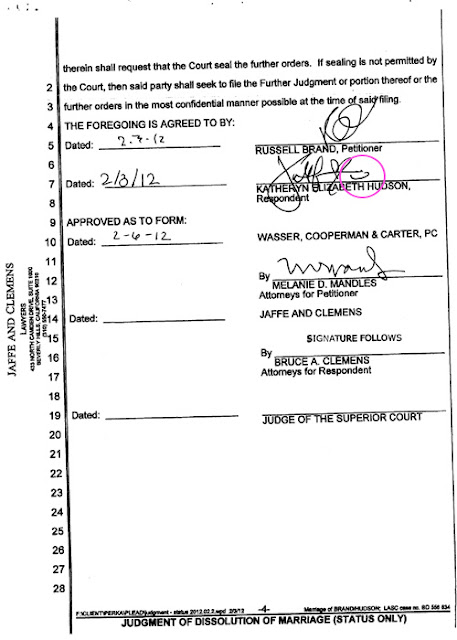 Katy Perry signs divorce papers with a smiley face, Katy Perry signs smiley face on divorce papers, Katy Perry and Russell Brand have reached a divorce settlement, more than a month after he filed the papers. The 27-year-old pop singer and 36-year-old British comedian and actor "entered into a comprehensive written settlement of all issues," according to court documents filed at a Los Angles court on Tuesday, February 7. Perry signed the papers on February 3 and her signature included a smiley face. The divorce is expected to be finalized within six months.
Perry has often included smiley faces, as well as doodles of hearts, in her signatures, as seen in autographed photos of the singer that are on sale on eBay.
Brand filed for divorce on Dec. 30, 2011, citing irreconcilable differences. He and Perry have no children. According to her recent filing, the singer has asked to restore her maiden name to Katheryn Elizabeth Hudson and also does not want the court to have any jurisdiction to award Brand any spousal support.
Perry, the daughter of California Evangelical pastors, married Brand on October 23, 2010 in a traditional Hindu ceremony in Rajasthan, India, where he also proposed to her. Their divorce papers do not specify when they split.
Before their wedding, Brand told New York Magazine that he "ain't doing no pre-nup" with Perry. Without a prenuptial agreement, a divorcing couple must split their earnings 50/50, according to California law. Details about Perry's settlement with Brand have been kept private and the documents only state that the rights to their properties are to be determined.
Perry, one of the most popular pop singers in the world, who has also participated in high-profile ad campaigns for Proactiv acne treatments and ghd hair care products, is estimated to be worth at least $44 million, according to Forbes. Brand, who played a rock star in "Forgetting Sarah Marshall" and "Get Him To The Greek" and stars in the new "Rock of Ages" film with Tom Cruise is worth about $7 million .
People magazine quoted a source as saying that Brand is "not asking for cash from his higher-earning wife." He and Perry have not commented about their agreement. Perry and Brand began dating in September 2009 after Perry performed at the MTV Video Music Awards ceremony, which Brand had hosted.
The pair share a common love for pushing the envelope - Perry with her colorful, edgy outfits and music videos, including one where she sported braces, and Brand, a raunchy, no-holds-barred stand-up comedian and former heroin addict who was fired from his previous job on MTV in his native UK when he dressed up like Osama bin Laden the day after the Sept. 11, 2001 attacks.
KATY PERRY AT THE GRAMMYS
Perry is meanwhile preparing for her first major post-split appearance. She is set to perform at the 2012 Grammy Awards on Sunday.
"Just finished rehearsals for Grammy's..." she Tweeted late on Wednesday. "I'm. so. excited. #somethingscooking."
Perry is also set to perform on Friday, February 10 at the MusiCares Person of the Year Ceremony, which will pay tribute to Paul McCartney and feature other performers such as Tony Bennett, Coldplay and Neil Young. McCartney, the 69-year-old former member of the iconic British rock group The Beatles, is also set to sing at both events.
Perry was slated to appear at the 2012 People's Choice Awards on January 12 but canceled the planned appearance soon after Brand filed for divorce. Despite her absence, she swept the awards show, winning the awards for Favorite Female Artist, Favorite Music Video, Favorite Song of the Year, Favorite TV Guest Star and Favorite Tour Headliner.
After her husband filed for divorce, the starlet made her first U.S. public appearance on January 27. She co-hosted the opening of the 1 OAK club at the Mirage hotel in Las Vegas.
The singer, known for her colorful looks and outfits, debuted bright blue hair and wore a black cocktail mini dress at the event, which benefitted the GiveLove charity. The group was co-founded by actress Patricia Arquette and develops temporary housing solutions and improved sanitation systems in Haiti for survivors of the 2010 earthquake.
Rapper and "NCIS: Los Angeles" actor LL Cool J is hosting the 2012 Grammy Awards ceremony. Katy Perry is up for two awards: Record Of The Year and Best Pop Solo Performance for "Firework." She has never won a Grammy before but has been nominated several times in the past.
via: OTRC
Posted by News Hump at 04:59