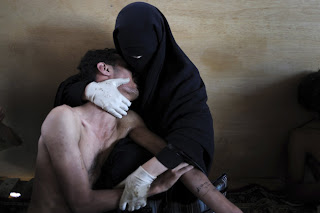 Arab Spring shot wins World Press Photo award, Powerful scene named photo of the year, A quiet moment captured at a mosque is hailed for showing the human cost of an "enormous event." Spanish photographer Samuel Aranda won the 2011 World Press Photo of the Year award on Friday for an image of a veiled woman holding a wounded relative in her arms after a demonstration in Yemen.
Jurors said Aranda's photo, taken for the New York Times, encapsulated many of the facets of the uprisings across the Middle East collectively known as the "Arab Spring," one of the major news themes of the year.
The photo was taken Oct. 15 in a mosque in Sanaa, Yemen, that was being used as field hospital after demonstrators protesting against the rule of President Ali Abdullah Saleh clashed with government forces.
"The winning photo shows a poignant, compassionate moment, the human consequence of an enormous event, an event that is still going on," said chairman Aidan Sullivan. "We might never know who this woman is, cradling an injured relative, but together they become a living image of the courage of ordinary people that helped create an important chapter in the history of the Middle East."
The woman is almost completely concealed under black robes, and she is wearing rubber gloves as she clasps her relative, a thin man whose torso is bare, grimacing in pain.
"It stands for Yemen, Egypt, Tunisia, Libya, Syria, for all that happened in the Arab Spring," said juror Koyo Kouoh. "But it shows a private, intimate side of what went on, and it shows the role that women played, not only as caregivers, but as active people in the movement."
The tsunami in Japan was another major theme of the competition, at which The Associated Press won three awards, including first place in the Arts and Entertainment Singles category, for David Goldman's shot of a soldier playing the drums at a Canadian army base in Afghanistan.
Japanese photographer Yasuyoshi Chiba took first prize in the People in the News Stories category for Agence France Presse for an April 3 photo of a woman, identified as Chieko Matsukawa, standing alone and holding her daughter's graduation certificate aloft after she found it amid a swirl of debris in Higashimatsushima, Japan.
In all, 57 photographers of 24 nationalities won awards in a field of more than 5,000 professional photographers, who submitted more than 100,000 entries.
The jury also selected a photo taken by an unidentified amateur for special mention: a still image taken from a video of a Libyan National Transition Council fighter pulling Moammar Gadhafi onto a military vehicle in Sirte, Libya, on Oct. 20.
"The photo captures a historic moment, an image of a dictator and his demise that we otherwise would not have seen, had it not been photographed by a member of the public," Sullivan said.
Aranda's photo also took first place in the "People in the News Singles" category. He will be given a cash prize of euro10,000 ($13,300) at a ceremony later this year.
via: yahoo
Posted by News Hump at 05:45