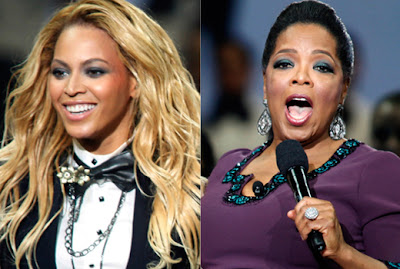 Oprah Winfrey is Blue Ivy's godmother, As if it weren't enough to be the only child of music superstars Jay-Z and Beyonce, Blue Ivy Carter now has Oprah Winfrey herself as her godmother, reports Media Takeout. The site also says that the godfather is Tyran "Ty Ty" Smith, a good friend of Jay-Z's.

The insider source who told Media Takeout claims that the famous couple did not want to name godparents as someone they are already related to, and they have become close with Oprah in recent years.
Well, goodness. Not too shabby of a godmother to have, right? Perhaps when Blue Ivy is all grown up, she'll marry Knox Jolie-Pitt and then they world will explode from the famousness of it all.
via: zap2it
Posted by News Hump at 10:56