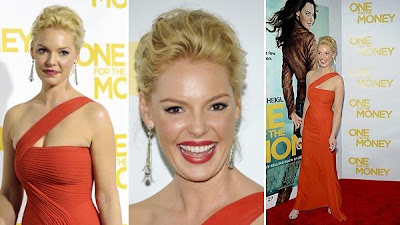 Katherine Heigl red gown, Katherine Heigl wears bright red gown to 'One For The Money' premiere,Katherine Heigl wore a bright red, tight Herve L. Leroux gown with a wide, diagonal strap to the recent New York premiere of her new action-comedy film "One For The Money," which hits theaters on January 27.Heigl completed the look with sparkling, peeptoe Jimmy Choo heels and Sethi Couture earrings. Her gown was designed by Herve Leger, known for the bandage dresses often worn by top female celebrities.
In "One For The Money," the actress covers her wavy blonde hair with a curly brunette wig to play Stephanie Plum, an amateur bounty hunter who must track down an old boyfriend, played by Jason O'Mara, who dumped her when she was in high school. Daniel Sunjata plays a man who helps her hone her bounty-hunting skills.
"One For The Money" also stars veteran actress Debbie Reynolds, 79, and Sherri Shepherd. The 44-year-old co-host of the ABC daytime talk show "The View" plays a prostitute named Lula.
The movie is based on a book by Janet Evanovich. The film is directed by Julie Anne Robinson, who also helmed several episodes of "Grey's Anatomy," the ABC drama series that helped make Heigl more famous.
The actress, a Washington, D.C. native, was previously known for her role on the sci-fi drama "Roswell." In recent years, she has starred in mostly romantic comedy films, namely the 2007 Judd Apatow hit "Knocked Up."
KATHERINE HEIGL MISSES 'GREY'S ANATOMY'
Heigl left "Grey's Anatomy" in January 2010 after playing Izzie Stevens since the show's debut. She said she wanted to concentrate on raising her and husband Josh Kelley's daughter, Naleigh (pronounced Nay-LEE), who they adopted from Korea. The girl, who is now 3, appeared on television with Heigl during her recent interviews on ABC talk shows "The View" and "Jimmy Kimmel Live!."
Heigl recently said she is interested in returning to "Grey's Anatomy," which is on its eighth season and is one of ABC's most popular shows.
"I always felt that ... if they want me to come back and sort of wrap up that storyline ... for me, I want them to know I'm down with it, if they want me to, but I completely understand if it doesn't necessary work in, too," she said on "The View. "There are a lot of storylines going on, there."
Heigl added that she "sometimes" misses working on the show.
"I miss my friends," she said. "It was a great work environment and that we all got along really well and it becomes a family. I spent six years with these people."
"Knocked Up" earned $219 million at the box office, including $148.7 million domestically. But films Heigl has made since then have not made as much of a profit.
She starred in the 2011 romantic comedy "New Year's Eve," which also featured other popular actors such as Robert De Niro, Michelle Pfeiffer, Zac Efron and rocker Bon Jovi. Since its Dec. 9, 2011 release, the movie has made $141.7 million, but only $54.2 million in the United States. Its production budget is estimated to have been $56 million.
Heigl's previous film, the 2010 comedy "Life as We Know It," fared better domestically. With an estimated production budget of $38 million, the movie made $53.3 million in the United States and $52.2 million abroad. "Killers," another 2010 film starring Heigl, earned $47 million domestically - about $28 million less than its production budget - and $51.1 million overseas.
via: OTRC
Posted by News Hump at 08:52