Katherine Heigl does One for the Money

Katherine Heigl does One for the Money 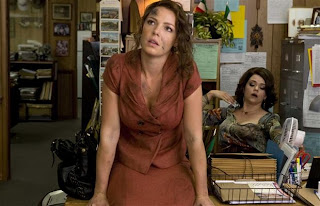 Katherine Heigl does One for the Money, After more than 20 years of working for somebody else, Katherine Heigl decided to try self-employment. So she bought the rights to the popular Janet Evanovich novels about a lingerie seller turned bounty hunter, Stephanie Plum.
Three years and lots of extra energy later, the actress has a movie to show for her first producing effort.
Heigl plays Plum in the action-comedy, One for the Money, which opens Jan. 27. The film is the first version of 18 books, so the 33-year-old is hoping for a franchise of her very own.
In the picture, Plum is unemployed, facing eviction from her apartment, and has no alternative but to drop in on her sneaky cousin Vinnie of Vinnie's Bail Bonds. The idea is to see if he needs an office assistant. Instead, Plum ends up being hired as a bail-enforcement agent.
Her first case is to track down an old high-school sweetheart, Joe Morelli (Jason O'Mara). He's a bail skipper, and a former cop, wanted for the murder of a drug dealer.
With help from the mysterious, streetwise Ranger (Daniel Sunjata), Plum finds Morelli, but soon discovers the case is more complicated than she thought.
Thrown in for good comedic measure is a possible informant and wisecracking prostitute (The View's Sherri Shepherd) and Plum's oddball grandmother (the Oscar-honoured Debbie Reynolds), who offer her observations, solicited and not.
Despite the fact that it took her longer than she expected to make the movie, Heigl became a fan of being her own boss.
"I loved the producer role on this, because it was important to keep the film really close to the book, because that's what I fell in love with, and that's what millions of readers have fallen in love with," says Heigl from L.A., where she's promoting the movie.
That meant that, during pre-production, she had to be single-minded on some things, yet willing to compromise on others.
"It was great to be in the room and have an opinion," she admits, "not that I was necessarily listened to all the time."
As headliner and producer on set in Pittsburgh, she decided to lead by example. She dyed her blond hair brown to be loyal to the Plum character from the novels. She also managed some gym time to get in running-and-jumping shape for the action role, although the actress confesses that her longtime stunt double, Cheyenne Ellis, did most of the more complicated stuff.
"I really count on her to protect me, and to tell me what I can do, and what I shouldn't do," says Heigl of Ellis, who also showed the actress how to perform a specific physical stunt for one particular sequence. "I had to clothesline a guy, and I would never have known how to do it, but she showed me."
Heigl says she's also proud of getting Shepherd and Reynolds on board, both scene-stealers in the movie. "We were lucky Debbie (Reynolds) was interested," she says. "And that's the same with Sherri (Shepherd), who ad libbed half of her lines."
And yes, allowing others to shine was fine with the producer and the star of the film. "I'd much rather be surrounded by stronger comedians than me, because it makes me look good," Heigl insists. "The only hard part was not messing up the takes by laughing."
Otherwise, she played to her comic intuition, reacting to what was around her. If she needed motivation, she went back to the books.
"Stephanie's a decent person with a big heart, and she's fearless and courageous, but perpetually puts herself in situations over her head," Heigl says. "I liked that she doesn't take herself very seriously, and doesn't take other people too seriously, either."
The former Grey's Anatomy star has enjoyed modest success in the romantic-comedy format. In 2010, Killers with Ashton Kutcher and Life as We Know It opposite Josh Duhamel received mediocre reviews and light box-office returns. She had better luck with 2008's 27 Dresses and in 2007's Knocked Up.
In fact, she's had an up-and-down film career, post-Grey's Anatomy, but she's accustomed to the vagaries of the business.
Heigl was a child model for catalogues and TV commercials, and made her acting debut at 11 in That Night, had a bit part in Steven Soderbergh's King of the Hill, then won a co-starring role in My Father the Hero.
The struggle of making ends meet is as familiar to Heigl as it is to her fictional Stephanie Plum character.
"I had lots of ebbs and flows, certainly, before Grey's Anatomy," says Heigl, who acted in the Emmy-winning series from 2005 to 2010. "I struggled a lot before that, and I was living from paycheque to paycheque, too."
That's why she's guarded but optimistic about the future of a Stephanie Plum franchise.
"My goal is to do two or three movies from the series," says Heigl. "But you never know, it could be like the James Bond series."
via: canada
Posted by News Hump at 08:40