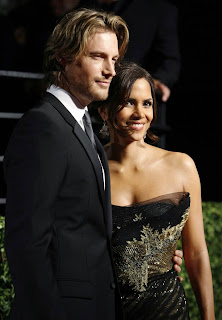 Halle Berry Wants Gabriel Aubry Away from Nahla Until Investigation Ends, Gabriel Aubry, Halle Berry's ex-boyfriend and father to her three-year-old daughter Nahla, is being investigated for battery and child endangerment. According TMZ, who broke the story, the former model allegedly violently pushed and harassed Alliance Kamdem, his daughter's nanny, while she was holding the child.
Kamdeem has since left the nanny position, but Halle Berry continues to push for a restraining order which will stop Aubry from having contact with her daughter for now. She will get a decision from the court on Monday.
"Halle Berry is going to court trying to block Gabriel from even seeing the child while all of this is going on," TMZ'z Harvey Levin said in an interview to ABC News. "People who have been around Halle Berry say she's a great mom. There are people who say that Gabriel has a temper and flies off the handle. There are others that say they've seen him with the kid and that he's very loving, so it really does depend on who you talk to."
The incident with Kamdem is allegedly one of many other scuffles described in a sworn statement she submitted to the court when she requested a restraining order yesterday. Kamdem, who has been the child's nanny since last June, claimed that at the beginning of her employment, Aubry became "verbally abusive and aggressive" towards her, uttering things like "You are a spy," "You're not even doing your job" and "Nahla doesn't like you, she doesn't even want you here."
Kamdem also alleged that last June, Aubry assaulted her at the door of his apartment while she was putting her shoes on by violently pushing her out the door and then slamming the door in her face. He also allegedly walked over to the Kamdem to grab or take Nahla away from her while hurling insulting towards her during a recent family trip to Spain where Berry had been shooting a movie. Then Kamdem finally filed a police report after she was "thrown into a wall" by a furious Aubry while she was holding Nahla.
Kambem's request for a restraining order was denied when a Los Angeles County judge called her request "insufficient and speculative," CNN reported. On the denial sheet, the judge wrote "If there are concerns they should be resolved in family court. You can proceed with any personal criminal charges against Mr. Aubry."
via: ibtimes
Posted by News Hump at 23:06